VirtualBox is a multi-platform and open-source virtualization tool for Windows, Linux, Mac OS X, and other operating systems, that lets you create virtual disc units in which you can install a guest operating system within the one you normally use on your computer, using it in the same way as if it was actually installed. 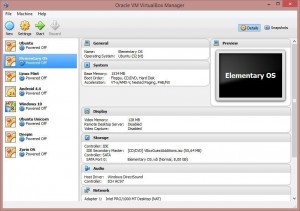 The virtual unit on which the system runs is completely customizable and lets you change the virtual hardware according to your needs, be it the processor, RAM memory, or the storage space. You need to have in mind that these take resources from your real hardware equipment, so need a powerful enough computer in order to run and interact between the host and guest operating system.

The program supports almost every version of the latest operating systems, such as Windows 10, Mac OS Yosemite, and the latest versions of Ubuntu and any other Linux distribution. The most obvious one is that you can use programs that are exclusive to a certain platform, not to mention that you can carry your virtual units wherever you want, and make safety copies of them too. In fact, an interesting feature in VirtualBox is that it lets you create instances in the guest operating system so you can resume your activity exactly where you left it the last time.