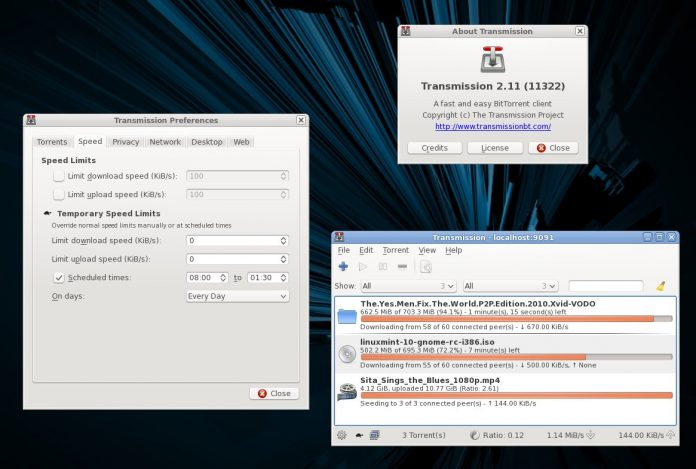 Transmission is a cross-platform BitTorrent client that is:

Transmission is an open source, volunteer-based project. Unlike some BitTorrent clients, Transmission doesn’t play games with its users to make money:

It doesn’t hold some features back for a payware version.

Its source code is available for anyone to review.

We don’t track our users, and our website and forums have no third-party ads or analytics.

Transmission is designed for easy, powerful use. We’ve set the defaults to Just Work and it only takes a few clicks to configure advanced features like watch directories, bad peer blocklists, and the web interface. When Ubuntu chose Transmission as its default BitTorrent client, one of the most-cited reasons was its easy learning curve.

In separate benchmarks, Linux Format and Lacrocivious both found Transmission to use less CPU than any other GUI client. It even used less CPU than some non-GUI clients.

Transmission also has the lowest memory footprint of any major BitTorrent client.

Imageshack chose Transmission for its BitTorrent farms because the competition requires amounts of memory several times greater than Transmission.

Transmission’s small footprint is one reason why many home device manufacturers, such as FON, Belkin, and Networked Media Tank ship with Transmission. When Belkin and Vuze Inc. partnered to write a Torrent Genie to let people who ran Vuze and owned a Belkin router keep sharing files even when Vuze wasn’t running, they decided to use Transmission — not Vuze’s own BitTorrent client — on the router.

Unlike many cross-platform applications, Transmission integrates seamlessly with your operating system.The Mac OS X interface is written in Objective-C and uses Growl notifications and dock badging to keep you informed.

It’s fast, it’s extremely lightweight, and — even though it’s available for a variety of platforms — it behaves just as you’d expect a Mac program to.
Macworld, naming Transmission a Mac Gem

The GTK+ interface has been carefully written to follow the GNOME Human Interface Guidelines. If your desktop supports popup notifications, desktop sounds, and a system tray, the GTK+ interface will make use of them.