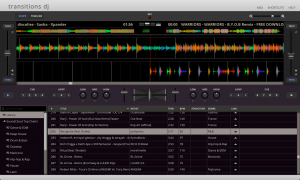 Transitions DJ is s digital DJ tool that lets you mix music on your computer with a mouse and a keyboard, giving you visual input and access to basic controls.

In recent years, digital mixing has been adopted by many amateur DJs and even by some of the most well-known and respected artists in the industry. While the latter may have found that digital tools can give them better control over their sets, the former are naturally attracted to DJ software as a cheaper and more intuitive way to learn the craft.

Naturally, if you’re thinking of becoming a DJ, you should first get your hands on a program, play around with it and decide if this is what you really want to do. So, could Transitions DJ be the program that you need?

A beautiful basic DJ tool
Transitions DJ is not too shabby when it comes to looks. Its track visualizations come in beautiful colors and, once you’re used to the display, the waveforms can help you “read” the tracks that you’re playing in advance.

You can view your virtual decks in two ways: Scope mode, which gives you a more detailed look at the waveforms, and Timeline mode, which is a useful feature that will let you better determine the exact moment when you should play the next track. Based on looks alone, Transitions DJ could convince you that it’s a professional digital DJ tool, and while the Timeline mode is indeed a pretty cool feature, other functions aren’t as impressive.

Very limited DJ controls
Transitions DJ’s user-friendly interface has a crossfader, pitch controls, knobs for high, mid and low frequencies and Play/Pause buttons. There is no Cue button, even though you can add Hot Cues (basically, points you can play the track from). You can also use loops to, well, loop parts of the song, and the hated-by-every-old-school-DJ Sync button.

Yes, most beginners will use Sync, but unfortunately, the app’s implementation only synchronizes the tempos of the tracks and not the song beats themselves – which is an essential part of mixing electronic music.

This wouldn’t have been a drawback if Transitions DJ somehow allowed you to adjust the tracks so you could beatmatch them by ear; but with no pitch bending options and a limited Sync function, perfectly timing the moment when you press Play is your only option.

The app’s lack of features makes it unsuitable for pros
Considering that this is a free app, it may seem inappropriate to complain about the lack of effects or individual track gain. But the truth is that you can actually get free versions of software that can do all of that.

Even though Transitions DJ lets you record your set, it’s hardly a program that can help you make the transition from “bedroom DJ” to club DJ. It may be a fun app that you can fool around with at your friends’ house parties, but not much else.