Play Classical Games and Launch Old Applications on Modern Computers and Consoles Using This Cross-Platform, Open-Source Emulator that Has an Online Library, Achievements, and More

RetroArch represents an interface for emulators, game engines and media players, giving you the possibility to run classical games and old apps on modern computers and consoles by troubleshooting compatibility issues.

For those familiar with PS3, the main window of RetroArch is a copy of the stylish XMB menu. Games and emulated consoles are constantly being added to the application’s library, and can be immediately downloaded and added to your own collection thanks to the built-in core updater. It can also load assets, cheat codes, artwork, and shaders, among other things.

It might be confusing at first to figure out how the app works. However, there’s help documentation available. Basically, it comes down to selecting the console you wish to emulate a game for (via the core updater, such as Amiga, Arcade or Atari), independently downloading ROM games prior to running this tool, asking RetroArch to scan the computer for games, then picking a game from the main menu and running it (provided that you have chosen the correct emulated console).

The program can auto-detect your collection and sort games. There are a wide range of options that can be configured for this app. For instance, drivers can be handpicked for the joypad, video, audio, audio resampler, camera, location, menu, and recording. Additional options concern the onscreen display, UI appearance, achievements, network, playlists, user information, default file locations, and privacy.

RetroArch is resource-demanding and may not work properly on machines without a powerful GPU. Otherwise, it’s very easy to use once you get the hang of things. It’s surely an essential tool for any user who wishes to play classic games on modern desktops and consoles using a cross-platform emulator with rich downloadable content. 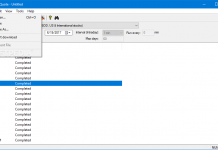