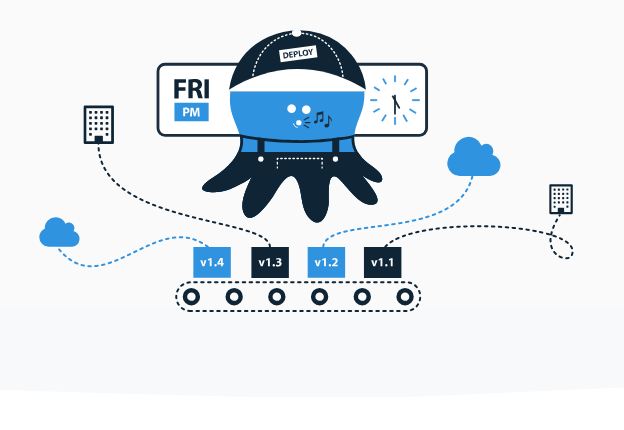 Effortlessly Automate and Reduce the Time Production of Your .Net and Java Applications and Websites with The Help of This Powerful and Very Efficient Deployment Server

Octopus Deploy offers a safe, repeatable, reliable solution for automating your deployments. Developed to successfully take over where CI (Continous Integration) server ends, Octopus Deploy makes it as simple as possible for you to automate even the most complicated on-premises and/or cloud app deployments.

To start off with, you should know that Octopus Deploy just fine with both cloud and local-based apps for both .NET and Java. In short, if you can package the app, Octopus can deploy it with the least amount of hassle involved. It’s also important to point out that Octopus is source control agnostic and features full integration with repository/version control services such as Git, GitHub, TFS/VSO, and Subversion. It also integrates with other popular services such as TeamCity, Team Foundation Build, Bamboo, and Jenkins, just to name a few.

And that’s just the start of it. Let’s take, for example, the situation where you build the binaries once, but you want to deploy and promote then many times. Octopus Deploy can help you do that while also ensuring that what goes to production is exactly what has been tested. Thanks to integration with popular build servers (which take care of build and unit testing) the app is mostly specialized on the whole deployment procedure. This interesting functionality mix makes Octopus Deploy a very well suited app for enterprise environments.

In addition, the app makes it simple for you to deploy your ASP.NET to Windows Services, your Java apps to JBoss/WildFly and Tomcat, and even reliably package and deploy Node.js server apps. Database migrations from SQL Server, Oracle, and many others is also something that Octopus Deploy can help you with. Last but not least, it’s worth mentioning that the app also supports a wide array of scripting languages like Powershell, C#, Bash, and F#.

While, at least at first, all this may seem somewhat complicated, you will be happy to hear that getting to grips with this utility is not exactly difficult, although we admit, you should take a couple of minutes of your precious time and read the provided documentation section on the developer’s website. Therefore, the​ ​popular​ ​Getting Started ​guide​ ​is​ ​the perfect ​place​ ​to​ ​start​ ​for​ ​newbies.

The app can be installed in mere seconds, and upon first launching the app, you should be greeted by a configuration wizard. Only when you go through the configuration process, you can get access to the app’s main interface.

Not Too Complicated Configuration Process

Using the credentials specified in the above-described configuration process, you need to log in the Octopus Web Portal with the help of your default web browser.

From this point onwards, things should become even more straightforward, and you can easily create new environments, add machines, create new projects and, ultimately, deploy them.

While Octopus Deploy has been around for just a couple of years, by now, it should be quite evident why it is now one of the most popular automation and deployment server for .NET and Java apps.

With the help of its specialized tools and relatively user-friendly environment, the utility streamlines the process of deploying apps and websites to a great extent and, ultimately, frees up a lot of useful time for you. Gone are the days when you would deploy your apps on a Friday evening, and you had your fingers crossed while hoping for the best!

We would also like to point out that Octopus Deploy offers all these services and a web portal to help you deploy apps, but it should be accompanied by its next-of-kin application Octopus Deploy Tentacle that needs to be installed on all the machines you want to deploy your apps to.