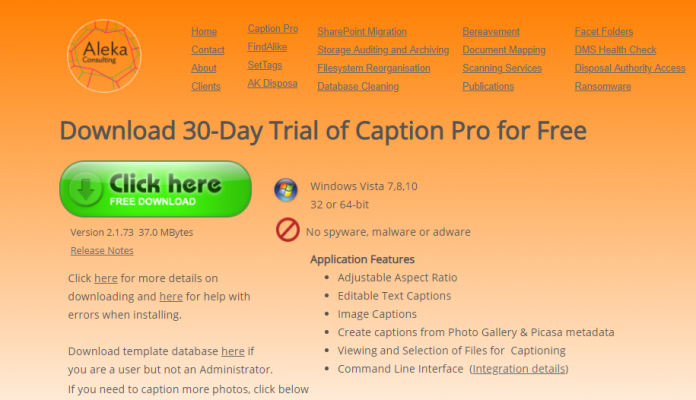 Photo captions are becoming more and more visible on the web; the result is the birth of the meme industry. Captions are lines of text used to explain or elaborate on published images. Captions are not limited by size or vocabulary and can be used practically on any photo. Many sites provide caption means, but if you would like to use a standalone app, CaptionPro can give you a hand.

The GUI is structured in such a way that excepting the photo tab, the text fields, and several adjustments settings, there are no other functions that fill the screen.

After an image is loaded, you can proceed to the caption writing and sizing. The first field is for the main caption, and the second is a sub-caption field, an extra info place. Using both fields is not mandatory, you can avoid completing one, and the other will function on its own. An interesting feature is “Auto-Caption” that analyzes the image and sets captions based on that.

On the flip side, CaptionPro can only load JPG files, as other formats are not supported. Therefore, if you an image that is not JPG and wants to caption it, you should first convert it.

You can also create slides from the captioned photos. In order to do that, click on the clock icon from the down-left corner of the GUI. The slide can be operated with classical player keys located right near the clock.

To sum it up, CaptionPro is an interesting app for creating memes and caption images for any other use. It quickly adds text to the JPG file and can also determine caption based on photo analysis. It can easily be used by any user no matter the skills, as tweaks and settings do not heavily burden the GUI.