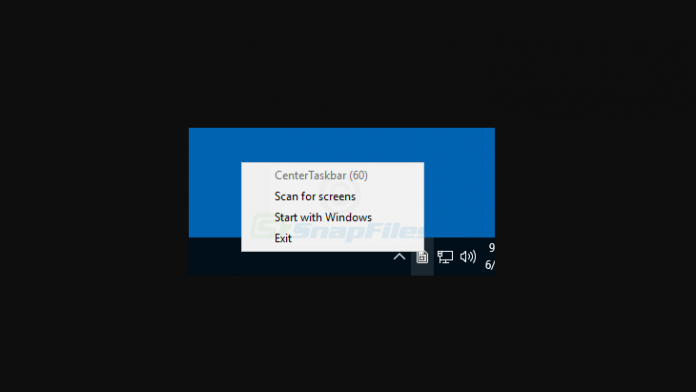 If you are looking to center the icons in the middle of the taskbar, and want to avoid creating a new toolbar, which is the slowest process, CenterTaskbar is a straightforward tool that may come in handy.

It has no user interface

The application has no UI and requires none, as it resides in the system tray and upon right-clicking it you can notice that it offers only two options. You can scan for multiple screens if you work with more than two monitors and the app failed to detect at first launch.

Also, you can set up the tool to start at the same time with the windows in order to avoid the manual opening every time you start your routine.

Sport a good number of features

CenterTaskbar packs several functions that sum up its construction. First of all, the software it’s dynamic, meaning that it will work properly no matter the number of icons holds by the taskbar. Also, it supports multiple DPI and it shrinks the icon accordingly to their number.

Furthermore, the tool was developed with performance elements in mind, as the CPU usage will go down to 0% when no resizing it’s taking place. Regarding users with vertical taskbars, there is no issue related to position, so the icons are going to be vertically centered as well.

To sum it up, CenterTaskbar is a lightweight and straightforward utility that allows you to center the taskbar icons and shrink them as their number went up. As it has no UI, you’ll only have to run the executable for the changes to take effect. CenterTaskbar provides support for systems with multiple monitors and ensures 100% functionality for vertical taskbar users. No issues or errors were encountered during our test, the app appears to be stable.