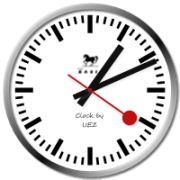 Windows Version of The Famous Swiss Railway Clock, in The Form of A Desktop Widget, Created for Users Who Are Fascinated by The Device’s Unique Design

The Swiss railway clock has become iconic, partly because of its clockface design, but mostly because of the unique way it operates. Digital versions of the clock can be found in many applications, as well as in widgets such as this one.

GDI+ Swiss Railway Clock provides you with a desktop version of the clock, which closely resembles the real-life device and functions in a similar fashion. It is very easy to use, and it offers multiple customization options.

Swiss railway clocks work like no other timekeeping device

While the clocks used in Swiss railway stations look relatively normal, the second hand circles the face in only 58.5 seconds, pausing at the top until it receives an impulse from the central master clock, which synchronizes all devices throughout the station.

This design came about as a way to ensure every clock in the station displays the exact same time, as there is no way for a single device to run too fast or too slowly.

Simple widget that can be customized in various ways

As far as the clock’s design is concerned, we can have no complaints. It looks pretty much identical to the real-life device, and even the bouncing of the minute hand is emulated. The second hand pauses at the top for 1.5 seconds, just like the devices found in Swiss railway stations.

From the system tray menu, you can set the clock’s size and transparency level to ensure it doesn’t look out of place on your desktop. Additionally, you can specify whether or not it should be shown on top of all other windows or remain in the background.

In short, GDI+ Swiss Railway Clock is a widget that will certainly interest clock enthusiasts, and users can customize its look and behavior easily from an accessible system tray menu. It should look great on your desktop, and you will never miss another train again.