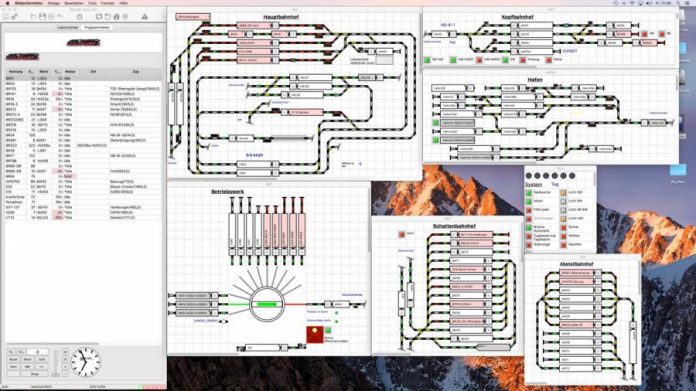 Rocrail is an open-source application able to control a model train layout from one or more computers. It runs on Windows, Linux, Mac OS X, and Raspberry Pi, and uses the wxWidgets toolkits. The utility provides support for automatic and manual modes for controlling the trains via blocks, routes, schedules, and complex patterns.

The program employs a server and client that work hand in hand via Internet protocols. It is not mandatory to run them both on the same computer.

Rocrail can be used from a single PC connected directly to the layout, and you may control your layout from any computer on your home network or over the Internet. It also offers support for web-based interface which empowers you to run the layout from various web browsers.

The server (Rocrail) works with a wide range of controllers, namely Märklin’s 6051, the Uhlenbrock Intellibox, Loconet, SRCP connections such as DDL/DDW, and others. The client (Rocview) connects to the server over the network and can be used for planning the layouts.

Rocrail offers you the freedom to configure the way the locomotives are controlled in detail. You may start with setting up locomotives, blocks, sensors, and routes, blocking events, and tweaking block occupancy.

The application lets you create multiple workspaces that include all files needed by the Rocrail server to control a layout, work with a modular layout, make use of the R2Rnet network for making roaming trains travel from system to system, and enable various command stations.

Furthermore, you can create staging blocks divided into multiple detection sections, tweak manual signals in automatic mode, define user actions to control anything, set up schedules for a realistic train flow, turn on the random automatic control, and work with symbol themes in SVG.

All in all, Rocrail comes with a comprehensive suite of features for helping you control a model railroad layout manually and/or automatically. The advanced pack of options makes it suitable, especially for professional users.