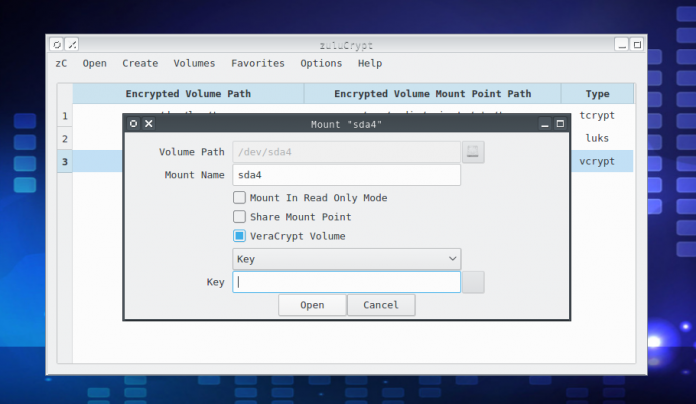 zuluCrypt is an open-source and freely distributed software project that has been designed from the ground up to provide users with both graphical and command-line user interfaces for easy management of TrueCrypt, LUKS (Linux Unified Key Setup) and Plain encrypted volumes under any GNU/Linux operating system. It’s a front-end for the cryptsetup command-line application.

Key features include the ability to create encryption keys that have 64 bytes in size and comprise of only the 94 printable characters, the ability to encrypt standalone files, add additional keys to volumes that are encrypted with the LUKS disk-encryption specification, as well as to delete keys LUKS encrypted volumes.

Easy to use GUI

While the command-line version of the program is pretty much the same like any other CLI tool, the graphical user interface is easy-to-use and straightforward, as it allows users to access encrypted volumes without too much hassle.

Under the hood, availability and supported OSes

While the software is written entirely in the C programming language, it uses the cross-platform Qt GUI toolkit for its graphical user interface, which means that it will run well on any distribution of Linux where the Qt4 libraries are installed.

The bad news is that the application is distributed only as a universal sources archive, forcing users to configure and compile it prior to installation. The good news is that it is installable on both 32-bit and 64-bit computers. It can also be found on the default software repositories of several GNU/Linux distributions, including Arch Linux, on which we’ve tested the software.