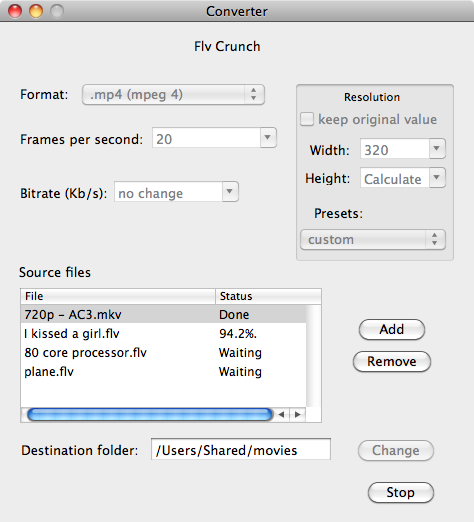 User-oriented and powerful video and audio converter OS X application that can be used to encode multimedia files between popular formats such as FLV, MPEG, MP3, and AIFF

Flv Crunch is a free and very easy-to-use audio and video converter for Apple’s desktop operating system. The utility can convert between numerous files such as FLV, MPEG, MP3, AIFF and much more.

Originally, the Flv Crunch application was designed to convert only FLV files (downloaded YouTube videos) but has grown into a universal media converter. This said Flv Crunch solves the problem of finding a reliable FLV converter that actually works without spending any money.

Flv Crunch features a highly intuitive interface, multiple handy features, and a fast conversion engine. From the main window, you can set the output file format and optionally change the frames per second, bitrate, resolution as well as output folder.

A key feature included in the conversion tool is the ability to change the video resolution. You can set the width and height of the video as well as preset (for different screens sizes) from the main window of the application.

Moreover, you can also change the video frame rates to any number and the bitrates to any value from the main window as well.

In addition to that, Flv Crunch features a menu for changing the sound: the stereo, mono, and no sound options are available here. You can also modify the sampling rate and volume for the files to be converted from the Sound menu.

The quality of your videos can also be changed via the Quality menu and four options can be seen here: No Change, High, Medium, and Low.

What’s more, you can also crop videos using any custom values in the Crop Video window which can be invoked through the Video menu.

Powerful and full-featured free multimedia converter for the Mac

As a bonus feature, the Flv Crunch utility can perform optional actions and display alerts at the end of the conversion process, which can be toggled from the Conversion menu.

All in all, Flv Crunch is a reliable and fast conversion OS X utility that includes a comprehensive toolset for any user who wants to effortlessly convert media files between multiple file formats.

On top of that, the license reads “Free”, which is amazing taking into account its powerful capabilities.