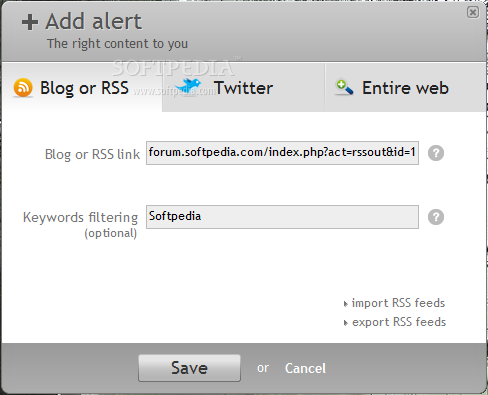 byTagg is a modern application that aims to monitor RSS feeds, blogs and Twitter accounts in order to notify you of updates. In addition, it also features an Internet Search utility that triggers alerts whenever new results are detected.

Today’s market is not short of RSS readers, nor of Twitter notifiers, but one application to accomplish both tasks is not that easy to find. byTagg, nonetheless, promises to carry out those purposes, with a twist.

With an intuitive and user-friendly interface, which resembles an IM application, byTagg manages to gather news feeds and blogs, as well as Twitter notifications in one single interface. In other words, all of these resources are just one click away.

The items to be monitored can be added to the list via a simple dialog or by importing them from external files (BYT, OPML, XML). For Twitter alerts, all you have to do is enter your credentials, while the Search function requires you to input a keyword and to select the platforms to be scanned (entire web, blogs, news sites or Twitter).

As soon as you’ve succeeded in adding your resources, you should be able to visualize all of them in the main window of the program. The application then performs a quick check on each of them, displaying the number of alerts resulted from the scan process.

Our tests revealed ups and downs in the program’s behavior. It worked just fine for the RSS / blog feeds and for the Search function, but it failed to connect to Twitter, even with a proxy server activated. Other than that, it managed to trigger notifications for each of the items, as expected.

In conclusion, byTagg is a decent newsreader that works for feeds, blogs and web searches. A big minus is the Twitter notifier, which failed to demonstrate its purpose.