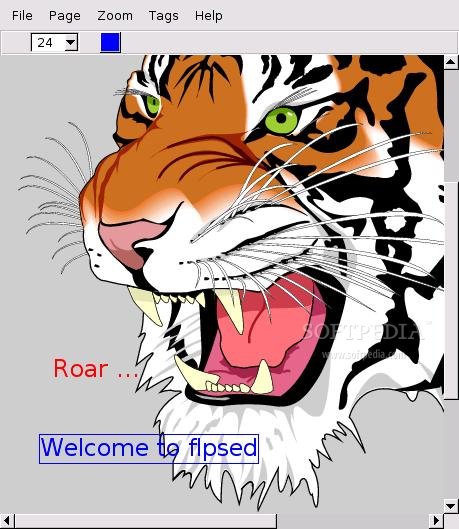 flpsed is an open-source and freely distributed software project that provides users with a capable WYSIWYG (What You See Is What You Get) editor for annotating (add elements to a file) PDF and PS (PostScript) documents. However, it can not be used to modify or remove existing elements from these files.

With flpsed you will be able to re-edit the annotated text (yes, the one that has been added with flpsed), batch process multiple documents to modify tagged text lines, which can be very useful when you have to repeatedly fill in forms, as well as to convert PDF documents to PostScript files or add text to them using the pdftops tool, which is part of the Xpdf project.

Additionally, you will also be able to export PostScript files to PDF (Portable Document Format) documents, export and import PDF files, edit PDF documents, as well as to import text lines from other flpsed-modified documents, add random text lines to existing PostScript (PS_ documents, add notes. Keep in mind, that the overall structure of the PostScript document will not be modified when using this program to add extra text lines.

The application is written entirely in the C++ programming language, requiring only the FLTK GUI toolkit for its X11 graphical user interface, as well as the powerful Ghostscript utility for manipulating PDF and PS documents. It is supported on any GNU/Linux and BSD operating system, running on both 32-bit and 64-bit hardware platforms.

It is available for download as a universal source archive, forcing the user to manually configure and compile the application prior to installation (detailed instructions can be found on the tarball), as well as pre-built binary packages for Debian, Ubuntu, openSUSE and FreeBSD operating systems.