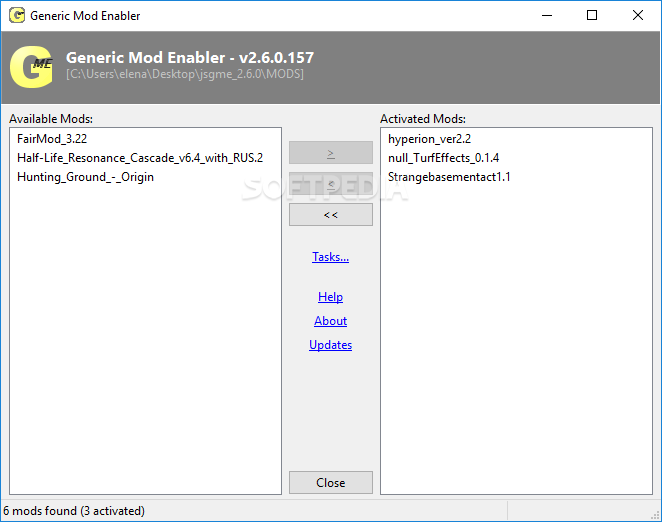 Install and Uninstall Game Mods with Ease by Creating a Mod Library, and Take Snapshots of Game Files to Later Compare Them and Check for Differences

Although video games are generally entertaining, the fun is over once you reach the end of the mission, unless there are bonus quests or other approaches to intrigue you into replays. Serious gamers, however, know how to enhance their gaming experience by downloading and installing mods, whether we’re talking about customizing the visuals or exploring custom levels designed by the fans.

Generic Mod Enabler (jsgme) is a tiny tool specially made to help gamers seamlessly create a library out of multiple mods and activate them. It’s wrapped in a plain and simple interface that reveals two panes for viewing the available and enabled mods, respectively.

By default, the application checks for game mods in a folder called “MODS”. As informed by the developer, it’s likely to cause conflicts if your game already has a directory named this way. To skip this risk, it’s simply necessary to choose a different name for the mods folder.

Besides this, you can import mods from any folder via the “Tasks” menu, which can be activated by selecting a mod and clicking a button to move it to the second column. If you’re handling numerous mods, you can create multiple profiles with different settings, save them to file, and later open them to pick up where you left off, without having to go through the import step again.

Generic Mod Enabler also gives you the possibility to generate snapshots of game files, which can be compared to determine any changes. It can also find mods on the computer by full or partial matches, copy the list of activated mods to the clipboard or save it to a text file, as well as refresh the lists.

Taking into account its overall simplicity, Generic Mod Enabler delivers a simple and straightforward solution for helping you activate multiple game mods at the same time. It worked smoothly on Windows 10 in our tests.