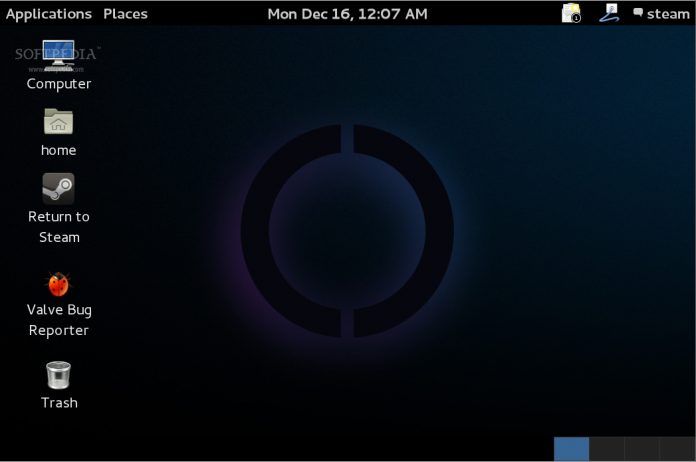 The future is here and it’s called SteamOS, a free Linux distribution built around the popular Steam gaming distribution platform and based on the powerful Debian GNU/Linux operating system. Being targeted towards the regular gaming user, the SteamOS operating system provides a gaming platform where Steam is the main software used by users to enjoy some of the best gaming experiences on Linux.

Supports both UEFI- and BIOS-based machines

No one ever thought this could happen, Valve choosing Linux to build their Steam-based gaming operating system on open source technologies. However, users will also be able to run regular Linux applications inside SteamOS, thanks to its regular desktop mode powered by the GNOME desktop environment. Powered by a recent Linux kernel, SteamOS supports both UEFI- and BIOS-based machines, proprietary graphics cards, including Nvidia and ATI, as well as modern, high-end hardware components.

It can only be installed, no live mode is available!

Unfortunately, the SteamOS Linux operating system cannot be used as a Live CD, directly from a USB or DVD media, as it can only be installed locally on a hard disk drive (HDD) or solid disk drive (SSD). Valve provides two installation methods, a Debian installer, supporting both 64-bit and 32-bit architectures, as well as a system, restore the image using the CloneZilla software. Detailed installation instructions are provided at http://steamcommunity.com/groups/steamuniverse/discussions/1/648814395741989999/

Once installed, you will be able to choose between two sessions, a regular one called SteamOS Desktop, where you can enjoy a GNOME-based desktop environment, and the actual Steam session, where you will be able to log into your Steam account and play games. The GNOME session of SteamOS includes various open-source applications, such as Brasero for CD/DVD burning, Evince document viewer, Eye of GNOME image viewer, Iceweasel web browser, GNOME Terminal, GNOME Dictionary, and GNOME Screenshot.

Valve originally designed the SteamOS operating system for its Steam Machines gaming console, which should be available sometime in the near future. Until then, you can download SteamOS and enjoy a rock-solid gaming environment powered by Linux.