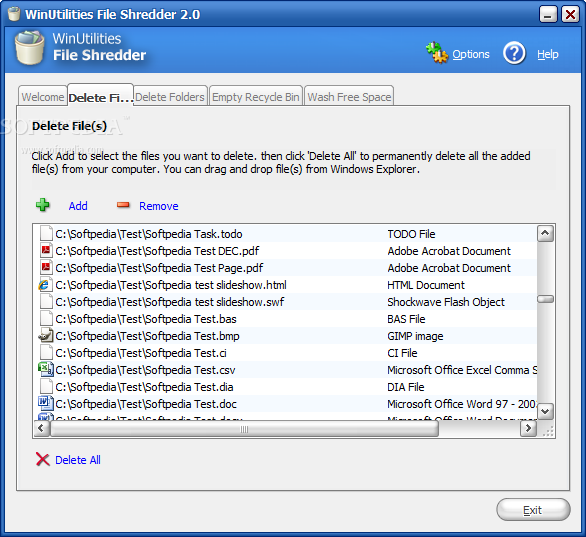 Remove Files and Folders Once and For All Through Specialized Wipe Algorithms, and Wash Free Space so That Already Deleted Files Can’t Be Recovered

Sure enough, deleting files and folders is done at the press of a button, but even after they leave the Recycle Bin, it doesn’t mean they can’t be recovered again. On the bright side of things, you can prevent file recovery with the help of specialized applications like WinUtilities File Shredder, which uses particular methods to make sure removed files stay that way.

Different wipe algorithms at your disposal

The interface consists of several tabs, the first of which neatly describes the process to quickly get you up and running. You easily find that it’s possible to remove files, folders, Recycle Bin items, as well as to wash free space, just to prevent any removed files from ever being recovered, even though the use of dedicated programs.

Files and folders are handled in a similar manner, and loading them can either be done by dropping them over the main window, or loading them through the browse dialog. Before you put the process in motion, there’s the possibility to select the type of method to use, which can be single pass, DOD, NSA, as well as Guttman.

Note that every removal method uses a different number of passes for removal, and it can take some time to properly wipe multiple files with powerful methods. Unfortunately, there’s no possibility to set a custom number of passes or have the delete function automatically wipe target items.

Files inside the Recycle Bin still take up disk space, which you can view in the dedicated section, and even remove. Last but not least, there’s the wash free space function, which doesn’t require you to select particular files or folders, but rather an entire drive, which can also be removable. This operation overwrites all empty disk clusters until there’s little to no trace of existing items in the past.

All things considered, we can state that WinUtilities File Shredder is sure to come in handy, especially if you work with sensible information which you don’t want to leave exposed. Built-in methods are sure to make removed items impossible, or at least a lot harder to bring back from beyond the Recycle Bin.