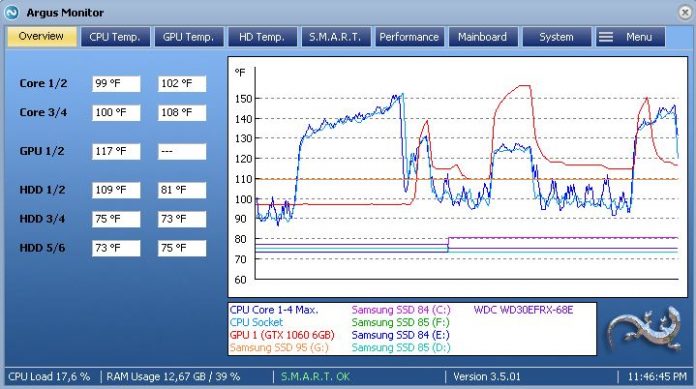 Monitor temperatures and status of system components such as CPU, GPU and hard disk drive, run SMART analysis and make sure your computer is healthy

A computer’s life can be considerably lengthened if you take care of it. Argus Monitor is a light tool that runs as a background task and constantly monitors the health of the hard disk.

The app has a simple interface that should be quite easy to figure out, thanks to the intuitive layout

As mentioned, Argus Monitor can keep track of the health status of the hard disks and lets you know if any of the values reach a critical level. Thus, if any of the S.M.A.R.T. (Self-Monitoring, Analysis, and Reporting Technology) attributes goes over a vendor specified threshold, the program lets you know that the hard drive is likely to fail within 24 hours. In this way, you have plenty of time to create a backup of the files in case anything happens.

Also, the program monitors the CPU and GPU temperatures, as well as that of the hard disk. The S.M.A.R.T attributes are also being watched over, such as the raw read error rate, the spin up time, the spin retry count and airflow temperature, to name just a few. These are set in a list that comes complete with the current values, worst performance, the developer-specified threshold, and its status.

The CPU’s speed is also monitored, as well as its power levels

All in all, Argus Monitor is a nice tool that can be quite useful. Less experienced individuals shouldn’t have any troubles while installing and working with it, thanks to the intuitive layout.