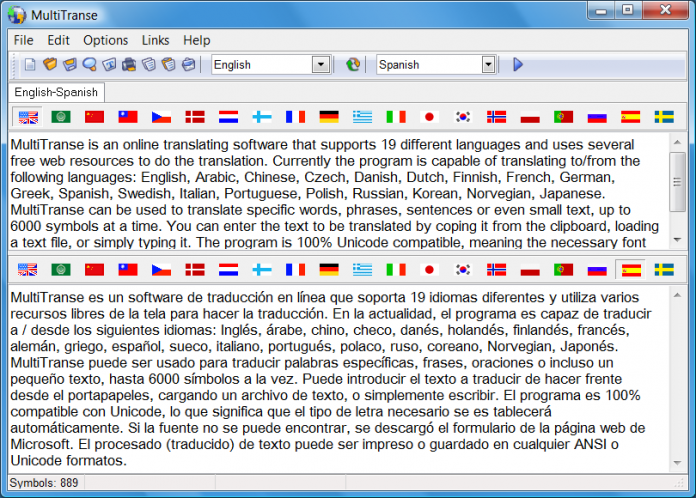 Translates Both Text Pieces and Document Contents from And to Several Eastern Languages, Offering an Alternative to Online Tools

The interest in eastern languages has continuously grown over time, as there are not so many professional translators that master such difficult vocabularies. Language barriers can be broken by an accurate translation and, in the absence of a human interpreter or translator, a dedicated software tool can carry out the tasks and get your message ready for sending. While you can also rely on online engines to translate a text, there are dedicated desktop applications, such as MultiTranse Oriental, that offer an alternative.

Designed with ease of use in mind, MultiTranse Oriental enables you to translate both text pieces and documents to various languages. The so-called Oriental edition is geared towards eastern languages, including Chinese, Japanese, Turkish, Arabic, Thai, Indonesian, Filipino, Korean, Hebrew, Hindi, or Vietnamese. A few European languages are supported as well, namely English, French, Italian, Spanish, and German.

Keep in mind that although it is a desktop utility, MultiTranse Oriental requires an Internet connection to perform the translation.

Translate text and documents, and save the output locally

There are two different panels that make up the main window of MultiTranse Oriental. The first hosts the input text, which you can either paste from the clipboard or load from a text document on your computer. The second panel displays the translation. There are language selection buttons next to each panel, which enables you to conveniently choose the source and target languages.

The resulting translation can be saved as a text file or printed on paper. Alternatively, you can also save both the initial text and its translation in a single file.

A translation tool for eastern languages

MultiTranse Oriental comes in handy for those who are interacting with eastern languages and need a reliable translation tool. However, it relies on online sources as well, so it is too much to say that it provides an offline alternative to online translation engines.