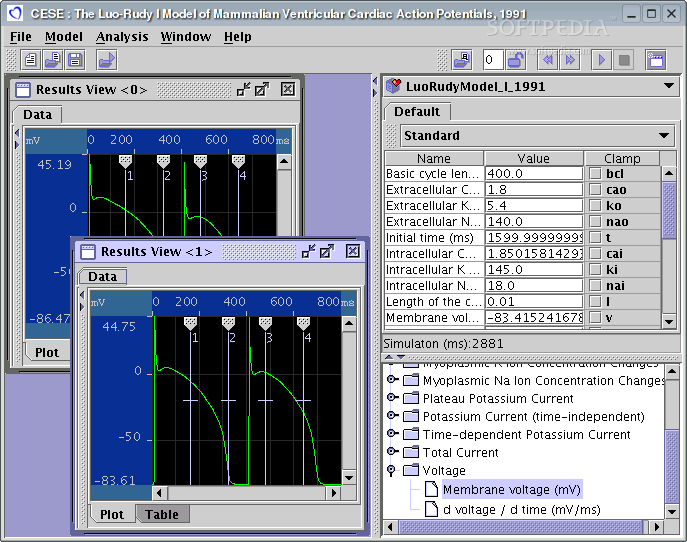 CESE is a cross-platform program, it runs on any system that has a Java runtime environment (JRE) version 1.4 or above. It was tested on Windows, Linux, Solaris, macOS X, and AIX.

CESE is an integrated environment for performing computational simulations using a variety of electrophysiological models.

At this stage, CESE allows creation and execution of the single-cell models (containing both Hodgkin-Huxley (HH) and Markovian current formulations). Models of the electrical activity of cardiac myocytes with source code are included in the CESE distribution. We hope to extend the number of available models, and add certain neuronal models in the future.

The main strength of CESE is in its uniformity � a program interface remains the same for different types of models. You can easily switch between models and compare simulation outputs. Model parameters can be modified, selected for output and/or clamped in the same, standard way.

CESE extends the conventional electrophysiological meaning of the “voltage clamp”. You can clamp virtually any model variable, including voltage (membrane potential), total or individual ionic currents, ionic concentrations, temperature, gating variables, etc. The clamping commands can be complex piece-wise functions, individually set for the model variable of interest. This opens endless possibilities for the exploration of complex model behavior.

CESE provides simple, but efficient data visualizations. Simulation results can be presented in the graphic and tabulated forms. Plots can be customized, and regions of interest zoomed.

Even though CESE was not designed to be a data analysis tool, you can generate current-voltage relationships (I-Vs) and calculate statistical parameters for a given signal within the program. You can export your data to ASCII, Axon Text File (ATF), and NetCDF formats to continue analysis in your favorite package.

CESE was created from the ground up to incorporate the best programming practices available to Java developers, both in terms of user interface consistency and code clarity and reuse. Wherever possible, CESE relies on available Java APIs (for example Java2D, JavaBeans, JAXP) to simplify the code.

Model creation requires a number of house-keeping functions to be coded � these include ODE integrators, routines for handling model parameters, saving/restoring model state, visualizing simulation results, etc. CESE provides you with implementation for these routines, hence, you can concentrate on writing the code for concrete ionic current(s), and CESE will handle the rest.

CESE is not trying to create complicated programming frameworks on its own � rather, it utilizes core Java APIs. For example, models are Java components conforming to the JavaBeans specification. We use XML to specify clamping commands, and Java object serialization to save/restore model parameters.

What’s New in This Release:

iSyncr for iTunes for Android for PC Free Load on Windows 7/8/10/XP and MAC...