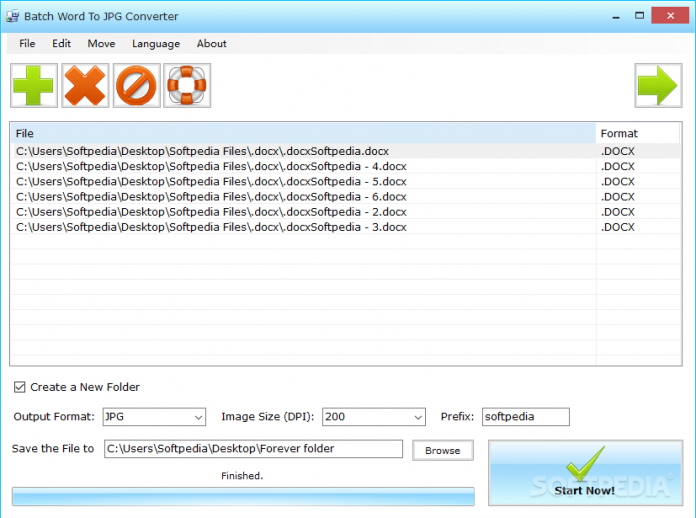 Convert bulks of Word documents to multiple image formats like BMP, TIF, GIF and more, without having to install the standalone MS Office app

As the saying goes – a picture worth a thousand words – and, in this case, it somewhat applies to the application covered here.  Batch Word to JPG Converter is a lightweight tool that lets you convert word documents (DOCX) to several image formats as well as some text related ones.

As half of the entire process relates to loading files in, then drag and drop function is somewhat mandatory, as it shortens the conversion by letting you load any number of files with only the mouse.

The interface is structured around the loading panel and backed up by several combo menus that determine the output location and format, file prefix and the image size. There are also several control options in the toolbar, but those are also covered by ribbon shortcuts, so the entire conversion and tweaking can be executed from the main window.

Of course, the output time may vary, but you have to load tens or hundreds of files at once to feel a difference.

Batch Word to JPG Converter can output to multiple image files and also, to the hybrid PDF. BMP, PNG, TIF, GIF, PCX, and TGA are all the supported formats found under the dropdown menu atop the loading bar.

All in all, Batch Word to JPG Converter looks like an efficient way of turning your Word documents to any of the image formats listed above. The user-friendly interface and the simple and few commands can make this app a go-to for any user that needs this form of conversion.

WOT (Web of Trust) for Mac