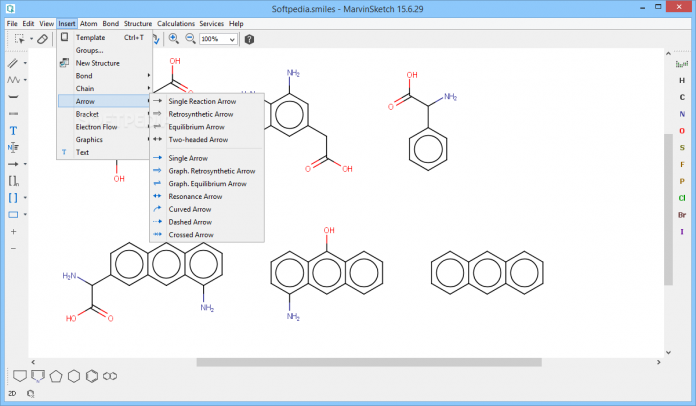 The world of Chemistry is highly complex and has benefited a lot from the development of digital tools. From simple formula recorders to complicated simulators and analyzers, chemists have a wide range of powerful tools at their disposal when conducting their research.

The program comes with four modules for viewing, editing and checking molecular structures

While not necessarily directed at researchers, Marvin Suite is a highly detailed modular suite that can assist chemists of all skill levels in creating and viewing molecular structures. In essence, it could be said the application consists of four separate but synergistic components, which allow users to gain a unique insight into the world of Chemistry.

The four modules and their purpose are as follows: “MarvinSketch” – allows users to draw molecules, including the bonds linking the atoms, “MarvinSpace” – can be employed to view the drawn molecules in a 3D environment, “MarvinView” – standard 2D molecule viewer, and “StructureChecker” – structural molecular checker that also attempts to fix issues.

Draw new molecules, complete with bonds and atoms with MarvinSketch

The modules can be launched independently, but their greatest power is gauged when processing the same chemical file with all the components. For example, one can employ MarvinSketch to create complex molecules from scratch; the program supports all types of atoms, with any valence, as well as radicals and isotopes.

All the while, MarvinSpace can be used as an accurate 3D molecular structure visualization program. It can display all types of macromolecules, including proteins and nucleic acids. Users can rotate the camera for a better angle and animations can be run to expose all the bonds.

Remove drawing and other structural errors with StructureChecker

For a watered-down version of the 3D viewer, users can employ MarvinView, which is a very valuable tool none-the-less that displays 2D molecular graphs. With it, users can view a wide range of chemical files, including MOLs, SDFs, RDFs or CMLs.

Finally, StructureChecker is a complex analyzer that can help users identify critical errors in drawn molecular bonds. With more than 40 built-in checkers, the program can detect simple structural drawing errors, as well as invalid bond lengths, overlapping atoms, and other similar issues.

View chemical compounds in either 2D or 3D with MarvinView or MarvinSpace, respectively

To sum up, Marvin Suite is a detailed molecular viewing and editing suite that can be employed as a highly useful educational tool.