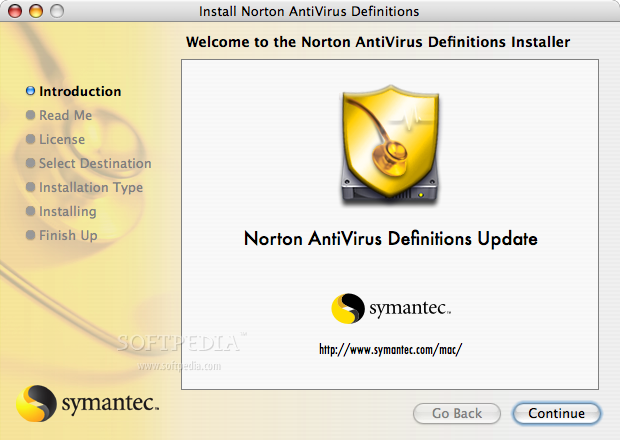 An Easy-To-Use Package Installer that Delivers the Latest Norton Anti Virus Definitions Updates for The Mac Os Version of The App.

Keeping up with the latest definitions for your antivirus application is essential in ensuring that your Mac is fully guarded against the latest online threats.

Since it would be bothersome to update your antivirus software’s database frequently, some security developers use external virus definition updaters.

Norton AntiVirus Definitions is a free installer package that updates the definitions database for your Norton or Symantec AntiVirus software to the latest version.

Furthermore, new versions of Norton AntiVirus Definitions are released randomly; sometimes, a new package is released daily for 7 consecutive days and, other times, a new release might appear 7 days after the latest one. Therefore, the release dates are based on the threats that have been discovered in a timeframe.

Safeguard your Mac against the latest threats

The definitions contain updated software solutions designed to protect your computer against the late-breaking worms, viruses, spyware, trojans and other malicious software that circulates on the web. Symantec works around the clock to deliver the anti-malware tools to combat the newest online threats.