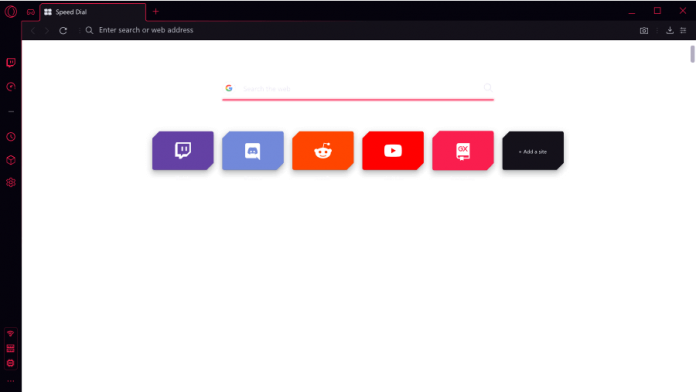 Unless you have a top-of-the-line gaming rig that can pump out frames faster than your monitor can handle them, which is unlikely if you’re a Mac user, you probably want to squeeze every last drop of performance out of your system. Shutting every single app down when launching a game is an option, but not an ideal one, as browsers are used for a wide range of purposes nowadays, and you generally don’t want to close them if you don’t absolutely have to.

Opera GX comes to the rescue of frame-hungry gamers everywhere. It was designed to run as lightweight as possible during your gaming sessions, while also offering some other interesting features you may be interested in, such as Twitch integration and a feed for the latest gaming news.

Not just a reskinned Opera

As soon as you launch the browser, you can’t help but notice that it looks a lot like Opera, which isn’t exactly surprising, and certainly not a bad thing. The question is, did the team add enough features to make this particular browser stand out? The answer is a pretty clear yes, even at this early stage of development.

Before we talk about the new features, we have to mention Opera GX‘s unique looks. It seems to draw inspiration from “gaming” hardware with its default black and red theme, which you may or may not like, but at least it doesn’t come with RGB. It is also extensively customizable, so you can easily make it suit your tastes.

The sound effects you hear while browsing are a nice idea, but we need a few more options here. I’m particularly interested in the typing sounds, which sort of mimic a mechanical keyboard without driving your family or teammates crazy, but the default sounds are quite disappointing.

It’s pretty obvious why you would want to keep resource usage to a minimum while playing a game that’s taxing on your rig. Reducing the browser’s CPU and RAM consumption will likely improve your framerate and help you avoid stutters, and it shouldn’t slow down the browser too much. Just don’t open 20 tabs and expect it to still run smoothly.

Twitch and other integrations

You can have something similar to this feature using various extensions, but it feels a lot more natural to have a Twitch menu right in the Opera sidebar. After logging in, you can track which of the streamers you are following are online, as well as go to their channel with a single click.

Not surprisingly, you can view a video or stream in a pop-out window, which is nice when you’re doing something else in the meantime. In the future, the development team also plans to let you watch a video while playing a game, in a floating window.

Of course, just like in the regular Opera, you can add various other apps to the sidebar, such as Messenger, WhatsApp, Telegram, and even a crypto wallet. However, you can’t add custom web panels.

Ad-blocker, VPN, and every other Opera feature you may already be familiar with

The rest of the browser’s feature set is pretty much exactly what you would find in Opera. You get a relatively basic but still useful—and free—VPN, as well as a built-in ad-blocker. Keep in mind that both of these need to be enabled manually after installing the browser.

It also comes with an impressive number of customization options, both visual and functionality-related. While Opera’s extensions store isn’t exactly massive, you can generally install add-ons from the Chrome Web Store without any issues.

So, bottom line. Should you install this browser if you’re a gamer trying to improve game performance and you don’t want to resort to closing your browser? Definitely. The fact that you can manually limit resource and network usage makes Opera GX invaluable in this scenario, and it’s the only major browser that lets you do this.

The other gaming-related features aren’t quite as impressive, but they are nice to have nonetheless. More will likely be added in the future, so keep a close eye on this browser if you’re not quite convinced yet.

Load Sago Mini Trucks and Diggers for PC on your Windows XP/7/8/10 and MAC...