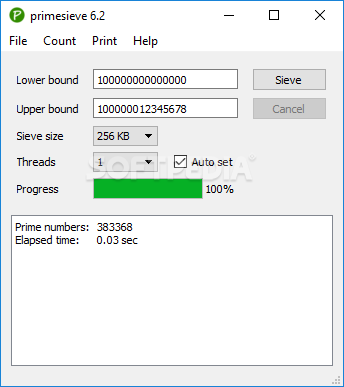 If you’re generally into mathematics, you may have heard about the so-called sieve of Eratosthenes. In short, this sieve is an ancient algorithm used for discovering all the prime numbers up to any given value.

primesieve is a minimalistic, tiny piece of software that uses the previously mentioned algorithm in order to help you swiftly generate prime numbers and even prime k-tuplets (values representing the repeatable pattern of differences between prime numbers) up to 2*64.

You can get started with this app in practically no time since it does not have any special requirements and it doesn’t require installation. Simply download the archive, unzip the package, and run the app via its designated executable file.

We’re not expecting you to have much trouble getting to grips with it since everything is pretty much right there in front of you. Just enter the lower and upper bound values in their nominated fields, select the sieve size and the number of threads from the drop-down menus, and hit the Sieve button to generate the prime numbers.

Highly optimized utility that makes use of the sieve of Eratosthenes

Taking everything into account, primesieve is an impressive little application that does its job valiantly. By far the best thing about this application is the speed at which it can generate and discover prime numbers between various intervals, with benchmarks displaying impressive results such as 0.45 for counting primes below 10*10 on an Intel Core i7.