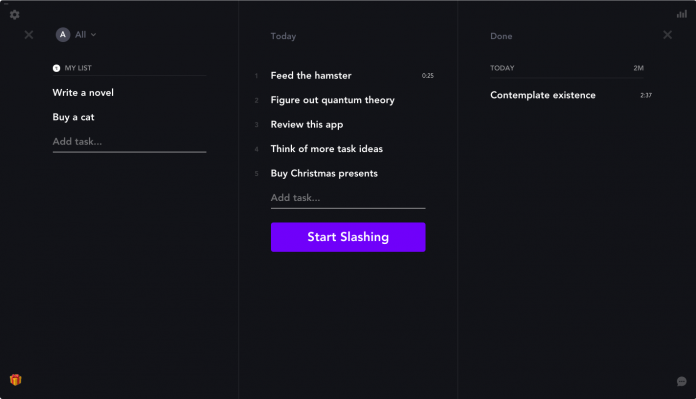 It seems we just can’t get away from to-do apps these days. They’re everywhere, and picking the right one is a task in and of itself. Despite their number, most aren’t particularly innovative, and they usually don’t give you an incentive to actually get anything done.

Slash aims to do things a little differently. Unlike a run-of-the-mill to-do app, it doesn’t limit itself to just helping you create lists. Instead, it actively motivates you to complete your tasks and even gives you rewards when you’re on the right track.

First thing’s first — adding tasks. This is something you’re meant to do in the morning and then just work through them until the end of the day. The process is exceedingly simple, as you just type something and press Enter; of course, you can also reorder them based on their priority.

Timed tasks can be added by just typing something like “___ for 10 minutes.” If you’re a fan of the Pomodoro technique, you can enable this functionality from the app’s settings.

If you want to take things a bit further, you can also create multiple lists and use them to assign daily tasks more easily. In a future version, you will also be able to synchronize tasks from services like Trello, Asana, and Todoist.

Slash tasks and get things done

Now we can get into what actually makes this app special. Once you’ve added all your tasks, click the Start Slashing button. The current task will be displayed in a small overlay, which can be moved on the screen freely but will remain on top of other windows.

When you have completed a task, the app will congratulate you on a funny GIF, although you can disable this feature if you prefer. More importantly though, unless you take a break, you can continue with your next task immediately; no time wasted browsing your to-do list, and no chance to get lazy and do something unproductive instead. Your daily stats are tracked and can be analyzed later.

Promising but still in development

I like the idea behind Slash, and it’s certainly more fun to use than a regular to-do app. If some strong-arming and funny GIFs are what it takes to get us on the road to productivity, I’m all for it.

Nevertheless, it has to be pointed out that the app is still in the relatively early stages of development. Key features are still missing, such as support for other services, and apps are not yet available for Windows and Linux.

Many quality-of-life improvements and additional customization options will probably be added until the final release as well, the most important of which would be support for recurring tasks and customizable hotkeys.