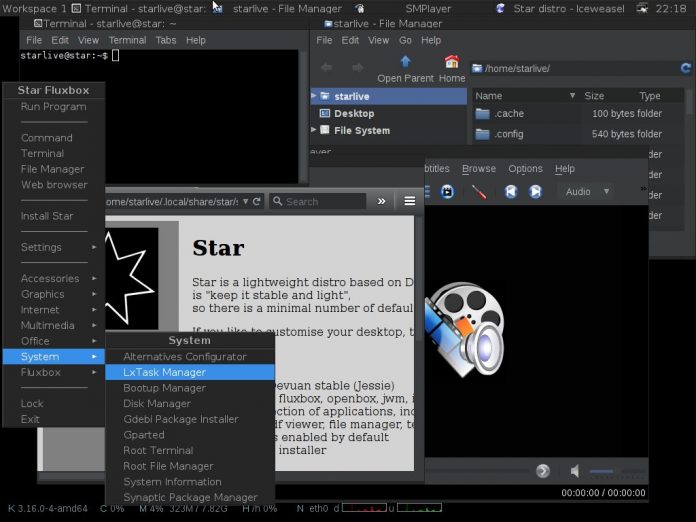 Star GNU/Linux‘s ISO images are supported on both 32-bit and 64-bit architectures, and they offer multiple boot options, such as the ability to run the system live without installing it, two install options (graphical and CLI), and various advanced options like expert install an automated install.

Multiple editions for all tastes

The distro comes with several editions that feature various popular lightweight desktop environments and window managers, among which we can mention Xfce, Openbox, Fluxbox, i3, and JWM (Joe’s Window Manager), the latter being supported on both 32-bit and 64-bit systems. A CLI edition is available as well.

A lightweight OS, not a bloatware OS

Star GNU/Linux can be easily described as a lightweight operating system, and it’s definitely not a bloatware OS as it only comes with a small selection of applications, including a web browser, media player, image viewer, text editor, document viewer, file manager, terminal, and various system utilities.

Each edition features pretty much the same set of apps, but the difference between them is the default components that are part of the respective desktop environment/window manager that’s installed by default. This also means that users can easily customize the OS to their needs.

We recommend Star GNU/Linux to all init freedom lovers and to those who want a more customized version of Devuan GNU/Linux. If you don’t care about any of Star GNU/Linux’s supported desktop environments/window managers, you can use Devuan GNU/Linux instead, but having more options to choose from is usually a good thing.