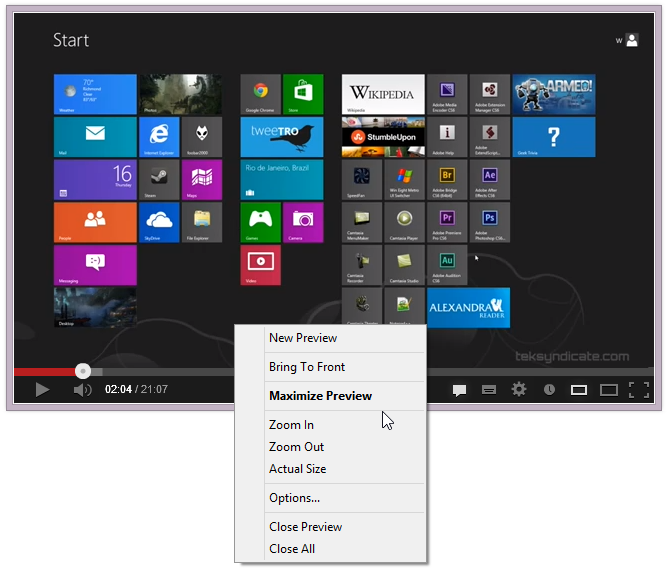 Keep an Eye out On What Other Applications Are Doing by Creating a Preview Pane You Can Resize and Move Around Your Desktop, Just Like Picture-In-Picture

Technology allowed us to experiment with different ideas in an attempt to make things easier in daily activities. Even entertainment benefits from cool perks like picture-in-picture, so you can watch two shows at a time. In this regard, Sticky Previews lets you do the same, but with applications running on your computer.

As soon as it starts, a new window is added to the tray area, because it stays there most of the time, not to bother you. For enhanced stealth, the application can be configured to use only the preview panes, without taking any space in the tray area, taskbar, or desktop.

The way it works is pretty intuitive, and setting up a new region is easy to understand, especially because of the description that accompanies the edit section. When activated, you need to use the mouse in order to select a custom region of the screen, to constantly keep an eye on what’s going on in that space.

However, there are a few things that were left out in the development process, which would have added a lot to practicality. For instance, the application only works if you target a program or window, and doing so on the desktop has no preview effect.

What’s more, the real-time preview is also lost if the target application gets minimized, being unable to constantly show a YouTube video while the browser is minimized, although playback is continuous.

This means that you either need a really large monitor because you need to reserve some space for the target window, as well as for the preview area, which kind of beats the purpose of it all. Sure enough, this can come in handy for a second monitor connected to your PC, but then again, you only need to move your eyes to see what’s going on.

Bottom line is that Sticky Previews comes with a neat concept, letting you monitor active windows from a central monitor. You can move, and resize a preview area, and even add more. However, the set of features it comes with is rather confusing, especially if you plan on using it on a single monitor.