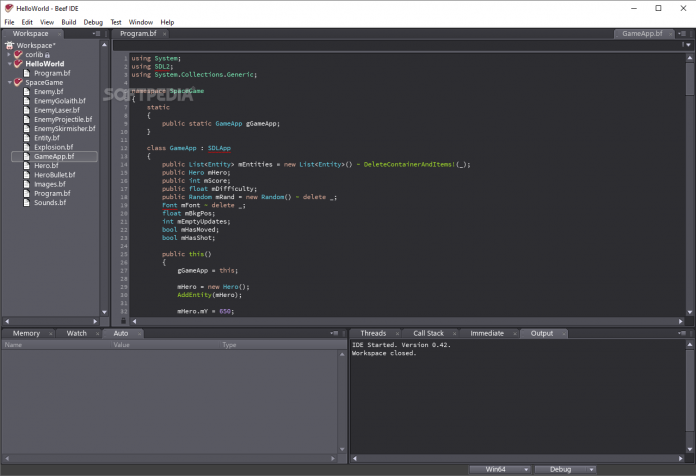 Develop “Beef” apps with the help of its bespoke IDE that boasts a whole series of useful features such as syntax highlighting, autocomplete, general-purpose-debugger and so forth

Beef IDE is one of the latest apps to join the ever-expanding market of integrated development environments. It’s a typical, general-purpose IDE designed to help developers debug native applications written in some of the most popular languages, but even more so to allow them to develop Beef apps.

As described on the project’s official website, “Beef is an open-source performance-oriented compiled programming language.” One of the main advantages of Beef IDE is that it has been designed almost hand-in-hand with the actual programming language it represents.

Another advantage is Beef IDE’s flexibility when it comes to platform support. That said, developers can run the IDE on all major OSes out there such as Windows, macOS, and Linux. It’s also worth noting that Android and iOS versions are in the works.

The app boasts a black and grey-themed GUI which follows the same design pattern of most modern IDEs out there. There’s a basic menu bar at the top, a Workspace Explorer on the upper-left side, and the actual code editor/compiler on the right. The lower section of the app’s GUI is home to auxiliary tools such as Threads, Call Stack, Watches, Auto Watches, Memory, Output, and so forth (all of which can be enabled or disabled from the View menu).

As expected, the IDE also has a few worth noting productivity features. These include autocompleting, fix-its, reformatting, various refactoring tools, type inspection, hot compilation, and even a built-in profiler.

A special note should go out to the IDE’s real-time leak detection feature. Developers can also mix different optimization levels on a per-type or per-method level. This allows for overall faster code execution.

Taking everything into account, there’s a lot more to Beef IDE than meets the eye at first. While it can be used by anyone with mild programming knowledge, the app’s geared more towards developers who value performance, simplicity, code readability, as well as good debugging features above all else. For more information about the project and various guides, developers can check out the project’s official Docs section.