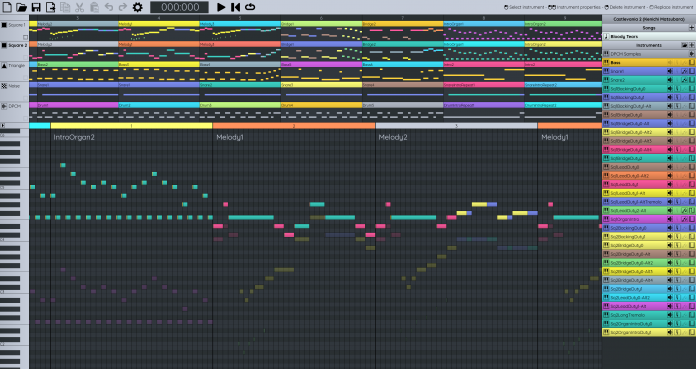 The launch of the Nintendo Entertainment System back in 1985 marked the beginning of a revolution that led to the global success of the video game industry. The initial success was due to a new standard in the quality of the games, a standard that helped birth gems such as Super Mario Bros, The Legend of Zelda, Metroid, Mega Man, Castlevania, Contra, and countless other classics.

Apart from the colorful graphics and the simple but challenging gameplay, many players will remember the catchy soundtracks. The sound quality was limited to 8 bits, but it was this exact limitation that made the music so beautiful and memorable. It surely left a mark on many musicians who created whole styles centered around 8-bit sounds, but it probably left an even bigger mark on the fans; I’m sure that there are very few among you who can’t hum the Super Mario Bros theme flawlessly.

So what’s FamiStudio about?
To put it simply, FamiStudio allows you to create NES-style 8-bit music. Its name is derived from Famicom, which is the name of the Nintendo game console that was only available in Japan and after which the NES was modeled. FamiStudio’s interface features a sequencer and a piano roll reminiscent of a professional DAW. However, when it comes to usability, things aren’t as smooth.

When you try to add the first notes in the sequencer, if you click on any of the bars, you don’t get just one note, but a whole infinite bar of that note, which you must stop yourself by adding a stop note (Ctrl + Click). This really isn’t an intuitive way to write music with mouse clicks; I’m sure that most digital musicians would be more at ease with creating a single note with one clicking and then dragging that note as they please.

FamiStudio isn’t necessarily a bad program. It sounds pretty good, and I’m sure that once you get used to the unusual workflow, you can actually compose something nice with it. But even though I like the colorful interface, I would probably stick to other plugins or synths that are dedicated to creating 8-bit music.