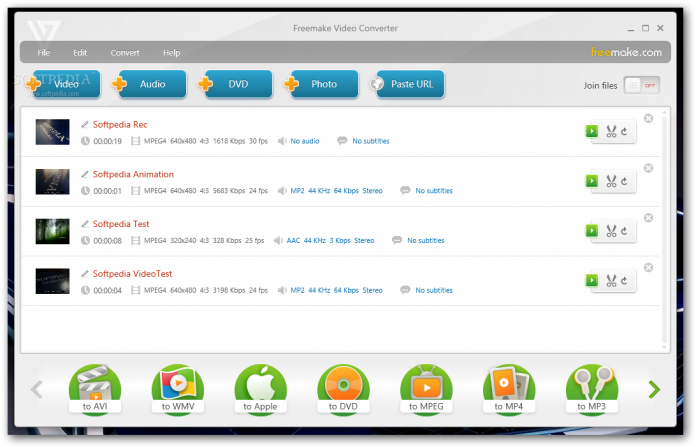 A user-friendly encoder that helps you convert various files, be they audio, video, image, or DVD to different formats using batch operations

Freemake Video Converter is a tool that can encode several videos, audio files, images, and DVD files to other extensions.

The tool recognizes the AVI, MP4, MPEG, WMV, 3GP, DVD, HD, MKV, MP3, WMA, FLAC formats and others, while its interface is very intuitive and attractive.

Once you have added files to the queue (the “drag and drop” method is supported), you can view their thumbnail, total time and audio/video settings, as well as preview the video in an external media player.

You can encode files to the AVI, MP4, WMV, DVD, MP3, Apple, Blu-ray, and other profiles, once you have selected and edited a preset.

After you select the output destination, you can initiate the conversion process, during which you can visualize total progress and optionally shut down the computer after the task is completed.

A task can take a while to complete (even in the case of small files and default settings), but that’s because Freemake Video Converter focuses on maintaining a good image and sound quality (which it accomplishes). The program also has well-explained how-to tutorials and an intro video.

However, the software uses a very high amount of system resources in its idle state and puts a massive strain on the computer when a task is in progress. Also, it becomes difficult to navigate back and forth in the videos, in some cases (e.g. FLV to MPG, WMA to MPG).

All in all, Freemake Video Converter is a great tool for encoding audio and video files, but one that eats a lot of resources and that causes minor glitches in the case of some output files.