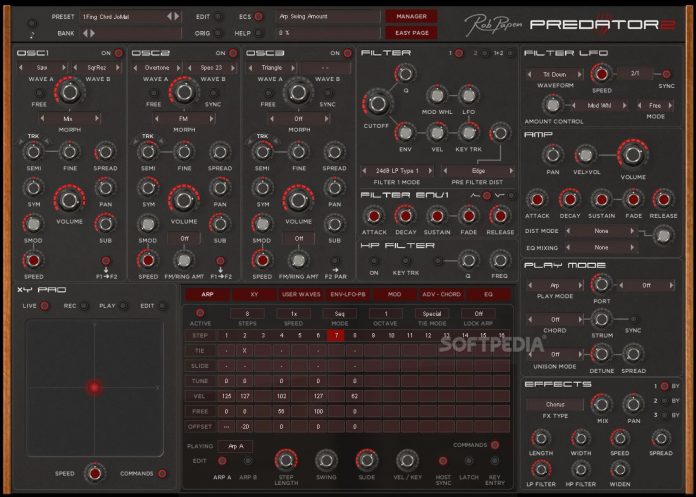 Create music with this complex but intuitive virtual synthesizer that comes with three dual oscillators, an XY pad, a waveform editor and plenty of other features

Even though Danny Glover doesn’t have the same screen presence as Arnold Schwarzenegger, Predator 2 still manages to hold its own as a fun action sci-fi that further develops a franchise centered around one of the most iconic aliens in cinema. Oh, we’re not doing movie reviews? It’s Predator 2 the synth? Right, right.

So, Predator 2 the synth is a sequel to Predator – one of Rob Papen’s classic virtual instruments which I never got to test. Of course, that won’t stop me from reviewing the product at hand, just don’t expect any comparisons.

From the get-go, Predator 2 comes forth as a very flexible synth. This shouldn’t surprise anyone, since no less than three dual oscillators reside at its core, allowing you to morph a wide variety of waveforms, from the basic sines and saws to more complex octaves, overtones, and vowels. If you’re not satisfied with the already large selection, you can always draw your own waveforms using many of the plugin’s intuitive tools.

For a synth with so many capabilities, Predator 2 comes off as user-friendly. Most of the parameters are displayed in the main interface, including filter, envelope, LFO, amp, effects (plenty to choose from), and even the XY pad – ever-present in Rob Papen’s more recent creations. In the lower middle section, you can switch between tools such as the arpeggiator, the XY pad command center, the wave editor, the modulation matrix, or the 3-band EQ.

For those who love darker sounds

As its gloomy-looking interface suggests, Predator 2 tends to lean towards dark, twisted, and even abrasive sounds. You can easily notice this while browsing through its many presets or by experimenting with its functions. So while this isn’t a program for producers who want to create soothing music, it’s a great sounding synth than offers many possibilities for exploring darker soundscapes.

RPG in a Box