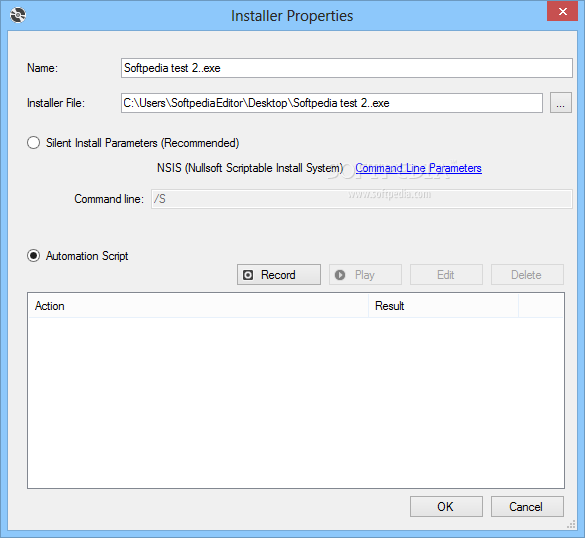 Silent Install Builder is designed with the purpose to help users create silent setup packages that allows them to install several applications on multiple computers.

Getting accustomed to the application is not difficult at all, thanks to its intuitive, well-organized, two-sided interface. The left pane displays the components of your project in a structured manner, while the right side enables you to edit the properties of each item.

Users can specify detailed information regarding their package, such as the product name, version, the manufacturing company and assign it a small file description, as well as a welcoming message that is included in the final output.

Make use of automation scripts

The location of the actual installer file must also be specified. Once the executable file to process is loaded, Silent Install Builder automatically detects the installer type, together with its command-line arguments, which can be edited by the user. For instance, an NSIS installer can optionally be launched silently and the CRC check can be activated or deactivated.

In addition to this, Silent Install Builder enables users to record and execute automation scripts, which allows the silent installation of an application that does not provide support for command-line options. The recording process is very intuitive, providing a visual representation of each screen of the setup procedure and allowing you to select controls and set actions to perform.

To sum it up

A silent installer is designed to run without displaying messages or pop-up windows during its running. Silent Install Builder can assist you in building such a package in just a few steps and distributing it to end-users.