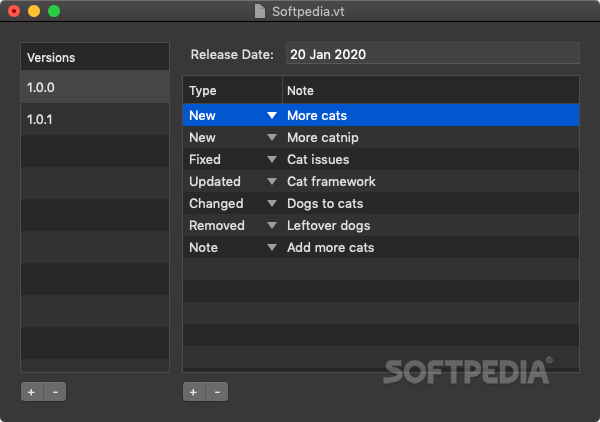 Create version history logs for your apps, maintain them, and export changelogs to several common formats, such as HTML, plain text and DocuWiki tables

As a software developer, an important part of every app update should be informing users of what has changed since the previous version. There are many ways to handle this step of the release process, some more complicated than others.

VersionTracker may be an ideal choice for small developers who are still formatting changelogs manually and don’t yet have a system for organizing them. It is very straightforward and supports several popular version log formats.

Just launch it and start typing

So you’ve built a new app, you’re planning to publish it, and you want to start a version log to inform users of what will change in future updates? Simply launch the app, click +, and enter the version number of the current (or future) release. Then, select the entry type and specify what has been modified.

Initially, all new changelog entries are marked as unreleased, which means that no date is yet attached to them. When you click Release, the app will add the current date to the version automatically, but you can always edit it later.

As you’re probably aware, there are multiple types of changelog entries that help users identify what is new and what has been fixed, updated, changed, or removed. An entry’s classification can be modified later, the classes themselves are customizable, and you can also reorder entries with drag and drop.

When you add a new version, the app automatically increments the number using the same format. I tried multiple versioning methods, and the app never seemed to have trouble figuring out which number should come next. Of course, you can always edit the version manually, and entries can be moved up or down with drag and drop.

Save version logs and export them to usable formats

The changelogs can be saved to .vt files that you can open later to add new versions. You can either export the entire changelog or just the current version, to plain text, HTML, or the DocuWiki format.

What’s more, you can view the changelog as text without saving it to a file, which is great if you only want to publish it on your website, and the app can even generate the HTML code to make your job easier.

In short, if you’re a developer looking for a way to create and manage version logs for your apps, VersionTracker is an excellent choice. It is incredibly easy to use, it offers enough customization options to suit most developers, and it can export changelogs to enough formats for you to easily publish them wherever you need.