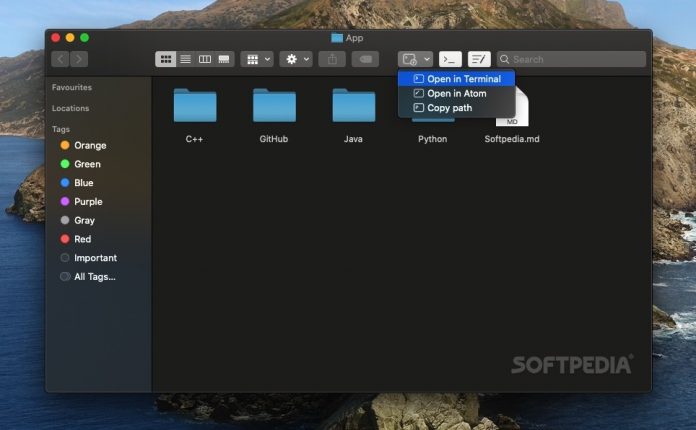 Open the current directory or a selected file or folder in your favorite terminal app or code editor, from the Finder toolbar, the menu bar, or even using hotkeys

There are several ways to open a folder in Terminal or other emulators, but none of them are as simple as most users would like. When speed and efficiency are key, an alternative is needed.

OpenInTerminal is just such an alternative. It offers four new ways to open a folder or file with a terminal app or code editor: using a Finder extension, the context menu, a menu bar shortcut, or with simple hotkeys. It is highly configurable, and lighter versions of the app are also available for users who prefer something simpler.

Open folders and files in a terminal app or code editor

After installing the application, go ahead and also enable the Finder extension. Once that’s done, you should be able to access it from the menu bar, Finder toolbar, and context menu.

You can select your preferred terminal app on the first launch, though it can also be configured later, along with your code editor. A number of popular options are supported, so it’s unlikely that your favorite won’t be among them.

To open a folder or file, or copy its path to the clipboard, simply select it and use the toolbar, menu bar, or context menu shortcuts. If nothing is selected, the current folder will be opened. You can also configure hotkeys for these functions.

Configure the app to your liking

You can specify which of the supported terminal apps and text editors should be used, provided they are installed. If you prefer, you can even enable the quick toggle function, which performs a selected action when the toolbar or menu bar icons are clicked once.

The menu bar icon and context menu items can be disabled at any time, and the toolbar shortcut can, of course, be removed directly from Finder.

OpenInTerminal Lite and OpenInEditor Lite allow you to open folders or files in a terminal app or editor with a single click, and only from the Finder toolbar. Once added to your Applications folder, hold ⌘ and drag the apps to the toolbar. Then, simply click either icon whenever you want to open something.

These smaller apps lack GUI preferences, keyboard shortcuts, and support for Dark mode. While the first two are to be expected given that the apps are designed to be more lightweight, the latter will make the icons look out of place if you use Dark mode.

OpenInTerminal is just about perfect for anyone who needs an easier way to open things in a terminal app or code editor. The multiple usage methods and configuration options allow it to suit anyone’s needs, my only gripe being that the Lite editions don’t come with support for Dark mode.