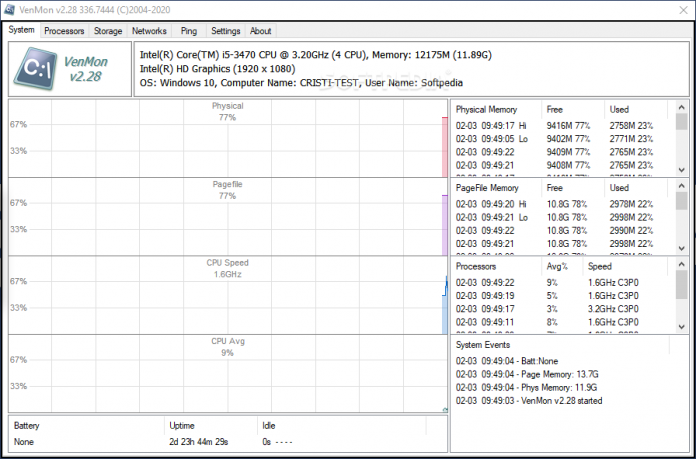 A lightweight yet powerful system monitoring tool that closely watches the behavior of your main components like CPU, physical drives, connection status and more

Monitoring a system holds different meanings for every user in part. For example, someone who just upgraded their CPU would look for an app that keeps an eye on the processor’s behavior, while someone who got a new GPU would surely try to find a tool that focuses on that component alone. If you want a tool that has a wider range when it comes to system monitoring and generates results in real-time, VenMon could lend you a hand.

Switch between the two interfaces

The application employs two UIs in order to offer the user a choice regarding the display of the gathered information. The first UI that pops up after the installation is over is a miniature one, which squeezes all the data in a very small panel. This UI provides basic information about the CPU speeds, physical memory state, battery percentage (for laptops or portable devices), network connections, available drives and more.

The larger and more complete layout can be accessed from the system tray, by clicking the app’s icon. This interface occupies more space and comes with graphical representations of the monitored processes, so if you are looking for more in-depth information, this would be the recommended form.

Cycle through the tabs to access all the information branches

The first tab that opens by default in the large UI is System. This page displays detailed information about the Physical Memory’s free and used space, PageFile Memory, CPU’s speed and System Events — the latter listing average values for memory space, idle time intervals, and battery state if your device has one.

The Processors tab offers CPU statistics only and splits the tab into a number of graphs equal to the number of logical cores. Even if most of us have around four to six cores, it’s important to mention that VenMon supports 144 logical cores. The remaining tabs are Storage, which monitors your physical drive activity and space; Networks, which tracks the sent and received packages and the connection’s stability, and Ping, which seems handy for users that need to monitor IPs and Hostnames in great numbers (up to 1024 supported pings).

All in all, VenMon is a smart application that monitors and offers real-time results about the behavior of the most important components of a PC/laptop. From tracking simple system actions, like battery percentage and idle times, to offering vast information about internet connections and managing over a thousand pings, VenMon looks like a personal doctor for your system.