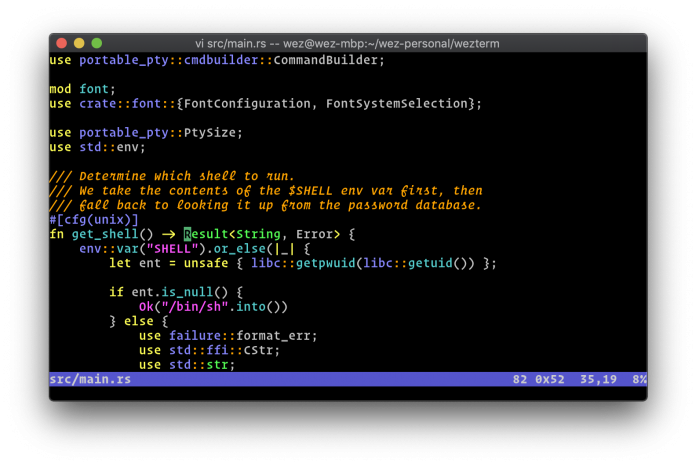 Say goodbye to the boring Command Prompt and give this GPU-accelerated, highly customizable, and cross-platform terminal emulator a chance

Designed by a passionate developer going by the name of Wez Furlong, WezTerm is a terminal emulator capable of running on all major OSes out there such as Windows, macOS, and Linux. Right off the bat, it’s important to note that it’s GPU-accelerated and that it only works on the latest version of the Microsoft OS, Windows 10.

Even though it looks pretty much as a standard CMD tool, WezTerm has an impressive feature set. One of the most important aspects of WezTerm is just how configurable it is. Users can change literally everything from fronts, fonts shaping, key bindings, colors, and appearances, as well as other miscellaneous aspects.

It also comes with support for Ligatures, color emojis, font fallback, hyperlinks (both implicit and explicit), as well as for true colors and dynamic color schemes. Users can use the mouse wheel and various key combinations (such as Shift+PageUp and Shift+Pagedown) to activate scrollback. Xterm style selection of text is also something that WezTerm can do. The selected section can be pasted using the Shift-Insert key shortcut.

WezTerm can also render underlines, double-underlines, as well as italic, bold, and strikethrough font effects. Everything can be changed from the Configuration file via hot reloading. It can also run multiple windows, and even multiple tabs (use Super-N, Super-T shortcuts to create them).

The emulator can also render an image inline as it comes with support for the iTerm2 inline images protocol. It also has a built-in SSH client (that uses the libssh2 library). This means that users can use it to create ad-hoc SSH connections to remote hosts by invoking the client. Since it can also connect to serial ports as a client, it’s perfect for users who work with Arduino and other similar devices. Last but not least, WezTerm also supports multiplexing.

This means that users can connect to local multiplexer servers over Unix domain sockets, as well as to remote multiplexers using SSH or TLS over TCP/IP.

To conclude, WezTerm is a feature-packed and highly customizable Terminal emulator that is addressed to developers/users who require a lot of flexibility in their work with Arduino and various types of servers.