Emacs (pronounced EE-maks and sometimes spelled “emacs” or “EMACS”) is a popular text editor used mainly on Unix-based systems by programmers, scientists, engineers, students, and system administrators. Like other Unix text editors, Emacs provides typed commands and special key combinations that let you add, delete, insert, and otherwise manipulate words, letters, lines, and other units of text. Emacs is commonly used to enter the source statements for programs. Emacs itself is built using the Lisp programming language and users are invited to extend or personalize it using the same language. Emacs also offers a number of convenient capabilities such as the ability to initiate a program compiler and to handle e-mail from within the editor.

Emacs (derived from Editing MACRoS) was created by Richard Stallman at MIT. A popular version is called GNU Emacs. Emacs offers a much longer list of commands than the other widely-used UNIX text editor, vi and the ability to extend the interface. Like vi, the full capabilities of Emacs require a considerable investment in learning (or relearning if you don’t use them continually). However, a beginning set of commands makes it possible to get to work immediately. 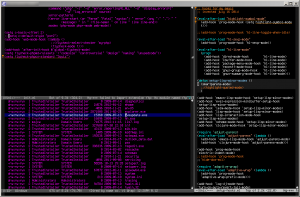 One or more versions of Emacs have been developed for use on Windows operating systems. A reader suggests another possible derivation for the letters in Emacs: Escape-Meta-Alt-Control-Shift – apparently referring to its use of key combination commands.

Emacs 26.1 has a wide variety of new features, including:

We at appsformypc have tested and used Emacs and it worked pretty smoothly. 🙂 🙂