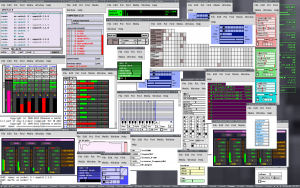 The approach of the library is to provide building blocks that perform signal processing informed by what we know of the peripheral auditory system. These blocks are useful to estimate perceptual attributes such as loudness or roughness, build time-frequency auditory representations, do some processing in the auditory time-frequency domain and then resynthesize other sounds. At the core of the library, for now, is a real-time implementation of the gammatone filterbank.

Pure Data is an open source visual programming environment that runs on anything from personal computers to embedded devices (ie Raspberry Pi) and smartphones (via libpd, DroidParty (Android), and PdParty (iOS). It is a major branch of the family of patcher programming languages known as Max (Max/FTS, ISPW Max, Max/MSP, etc), originally developed by Miller Puckette at IRCAM.

Pd enables musicians, visual artists, performers, researchers, and developers to create software graphically without writing lines of code. Pd can be used to process and generate sound, video, 2D/3D graphics, and interface sensors, input devices, and MIDI. Pd can easily work over local and remote networks to integrate wearable technology, motor systems, lighting rigs, and other equipment. It is suitable for learning basic multimedia processing and visual programming methods as well as for realizing complex systems for large-scale projects.

Algorithmic functions are represented in Pd by visual boxes called objects placed within a patching window called a canvas. Data flow between objects are achieved through visual connections called patch cords. Each object performs a specific task, which can vary in complexity from very low-level mathematical operations to complicated audio or video functions such as reverberation, FFT transformations, or video decoding. Objects include core Pd vanilla objects, external objects or externals (Pd objects compiled from C or C++), and abstractions (Pd patches loaded as objects).

Load Pixel Superhero Adventures for PC on your Windows XP/7/8/10 and MAC PC for...