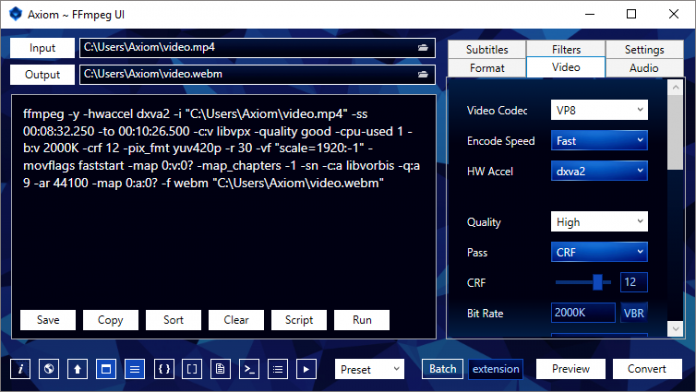 FFmpeg is undoubtedly powerful, but it isn’t exactly accessible to novices who aren’t comfortable using the command console. Thankfully, though, third-party projects exist that allow you to use the software from a standard GUI.

Axiom is one of them, a relatively straightforward app that packs the features offered by FFmpeg into an intuitive user interface. It enables you to convert media files to multiple formats, as well as resize and crop videos.

Semi-portable app that can be deployed easily

The application is available in two variants: one that requires FFmpeg to be downloaded separately and one that includes all the required components. You can set the FFmpeg and FFprobe paths from the program’s settings if they have not been detected automatically.

Axiom can be launched from any location on your PC, and it does not require installation. Its configuration file is not stored in the program folder, however, so it is not fully portable.

The app generates scripts that are run in a command-line window based on the parameters defined by the user, but the whole process is very intuitive. You can perform the conversion directly, as well save the script for later use.

Axiom enables you to convert media files to a wide range of formats, resize videos to certain aspect ratios, cut them down to size and even crop them.

Moreover, it is possible to process multiple files in batch mode by selecting the source folder and specifying which extension should be included.

Intuitive interface that makes it easier to take advantage of FFmpeg

As far as the actual UI is concerned, it features a fairly straightforward layout, and you even have several color themes to choose from.

All in all, Axiom is a great choice for users who like the capabilities of FFmpeg but prefer not to use the command-line. It is certainly intuitive, and it can be deployed with very little effort.