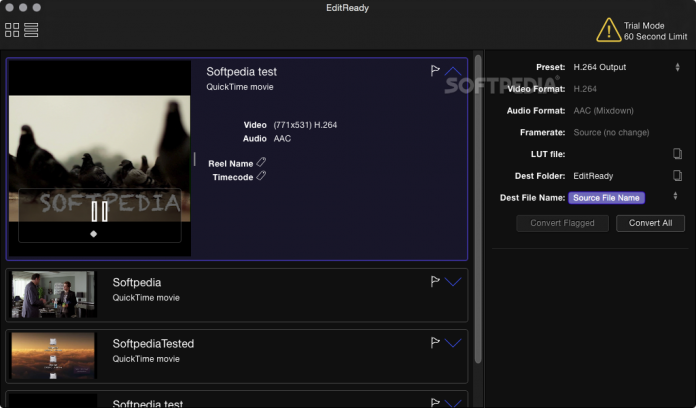 EditReady is a streamlined video transcoding tool that enables you to batch convert MXF or QuickTime files to editable formats that can be handled by professional applications, such as Apple ProRes, Avid DNxHD, Final Cut Pro, FCPX, Avid Media Composer, Adobe Premiere Pro, or Apple iMovie.

Finding your way around the EditReady interface is quite intuitive, but the developers also provide a collection of video tutorials to help you get started. Right off the bat, you must import the videos you want to process, by dragging and dropping them on top of the app’s main window, or on top of the EditReady Dock icon.

EditReady will display thumbnails for the included videos, but you can also play their content, and view some of the associated metadata. For your convenience, EditReady comes with a collection of transcoding presets which you can quickly apply to your own videos, but also enables you to create your own conversion templates.

Edit the videos metadata and batch convert them to editable formats

Besides the conversion features, EditReady also includes metadata preview and customization capabilities: via simple drop-down menus, you can select the parameters you want to modify, and then input the custom values.

As a result, while converting the media, EditReady will also embed the metadata. Furthermore, you can include certain elements in the file renaming process. The best part is that EditReady can perform multiple tasks at the same time, which greatly reduces the time you spend converting the videos.

EditReady enables you to quickly transcode QuickTime or MXF videos to file formats that can be edited at the professional level. In addition, the application can also apply LUTs in order to make color correction adjustments.