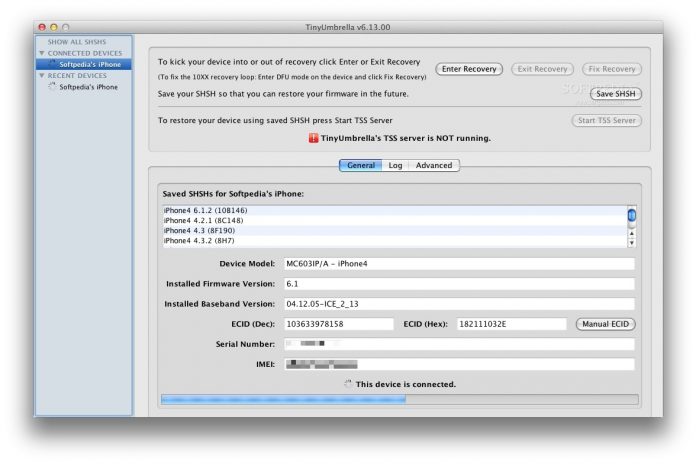 TinyUmbrella is a cross-platform application that allows you to restore the firmware on your iOS device (iPhone / iPod / iPad / Apple TV) which is not signed by Apple anymore. It is distributed as a freeware application for both the Mac and Windows platforms.

Basically, TinyUmbrella requests SHSH signatures (a secure signature hash signed by Apple) for firmware restores and plays back those signatures in order to enable iTunes to continue the restoration process. The application supports both jailbroken and non-jailbroken iOS devices and requires Java and iTunes in order to function.

Originally, TinyUmbrella was split into two different applications. One is Umbrella, which allowed you to save the SHSH file on your iDevice for restoring or downgrading the firmware. The other is TinyTSS that could playback SHSH files when restoring firmware via iTunes.

The utility features a straightforward user interface made out of three tabs and a panel for viewing your connected SHSH / devices. From the upper panel of the main window, you can enter, exit or fix a recovery, and restore your device using saved SHSH by starting the TSS server.

By accessing the General tab, you can view all saved SHSH signatures and other details about your connected iOS device. The middle tab called Log, allows you to view the Console activity, while the Advanced tab enables you to change the SHSH folder and several other options.

Keep in mind that before you can use TinyUmbrella, you must save your SHSH Blobs for the firmware you want to restore to. The whole process is not complicated as long as you follow the exact steps described by the developer.

TinyUmbrella application can be of real use to you if you own an iOS device and want to downgrade its firmware to previous versions which are no longer signed by Apple with the help of previous saved SHSH Blobs.