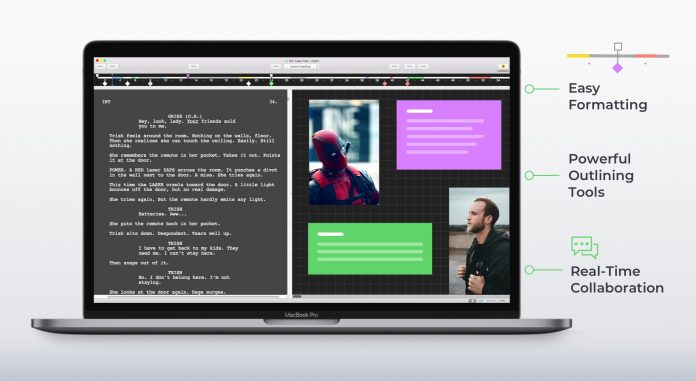 Using the Application You Can Write or Add Already Saved Projects, Then Format the Pages and Text to Create a Document with A Movie Script Layout

Final Draft is a comprehensive word processing utility designed specifically for writing movie and TV series scripts and other such productions. It features a spell checker for multiple languages.

The interface is not particularly attractive, but clean and easy to navigate. You can create a new project from scratch, or select one of the several templates provided by the app, such as screenplay, stageplay, half-hour sitcom, novel, or manuscript.

In addition, you can split the script window vertically or horizontally, customize toolbars, as well as edit element properties, such as scene heading behavior and shortcut key.

Other options of Final Draft let you create and run macros, display headers and footers, assign computer-generated voices to script characters, use a text-to-speech tool, generate reports, create a names database, check the script for formatting errors, host or join a session to collaborate with other writers, as well as compare scripts to spot differences between two editions.

The application is very light on the system resources, running on low CPU and memory. It has a good reaction speed and performs smoothly on newer operating systems, even if it has not been updated for a long time. All in all, Final Draft should please all types of writers, thanks to its wide range of options and configuration settings. You may also check out Final Draft AV, but it contains fewer features.