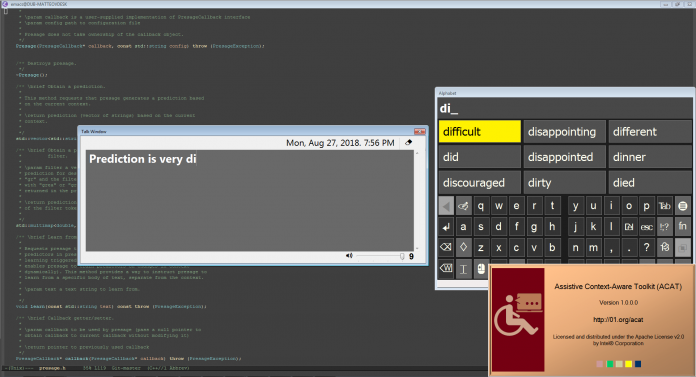 A predictive text entry system attempts to improve the ease and speed of textual input. Word prediction consists of computing which word tokens or word completions are most likely to be entered next. The system analyses the text already entered and combines the information thus extracted with other information sources to calculate a set of most probable tokens.

Presage is fundamentally different from predictive input technologies commonly found on mobile phones, which might more accurately be described as ‘disambiguating text entry’ rather than ‘predictive text entry’ systems.

Such systems do not try to guess what the user intends to write in the future, only to determine what they most-likely intend to write in the present, given their past input.

Presage, on the other hand, actively predicts what the user intends to write, and only reverts to word completion mode if the prediction did not contain the desired token.

Presage is free software and it’s distributed under the term of the General Public License.