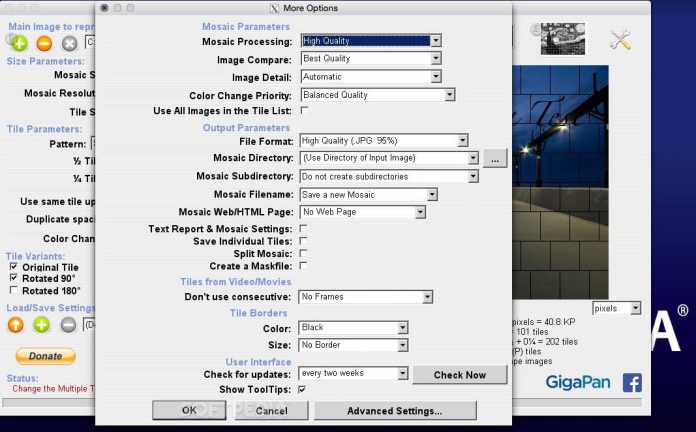 Dating from the second half of the third millennium BC, mosaics are creative images composed of various small pieces used commonly for interior decorations and decorative art.

Wine based wrapper with a non-native user interface

AndreaMosaic is a Wine based wrapper for the Windows AndreaMosaic program and is designed to help you build digital mosaics using images from your Mac’s hard-drive.

Because it is a Wine based app, you will not have the benefit of a proper OS X interface and the interaction between you and its controls will be similar in feeling with a normal Windows app. That being said, the application does the job just fine and worked smoothly while we have tested it.

In order to produce mosaics on your Mac, you can use the application in two different ways: you can either load the main image and transform it into a mosaic using grid lines and specific patterns, or you can load a folder with more than one image and use them for creating a true mosaic.

When you start the application, you will be greeted by a welcoming screen that enables you to choose the tile format for your mosaic project such as square tiles, rectangle tiles, movie tiles, or DSLR tiles, as well as a quick way towards the app’s manual, which has all the information you need for getting to grips with it.

Control every aspect of your mosaics for achieving the desired effect

Once one or more images have been loaded within the app’s main window, you can easily adjust the mosaic’s size, resolution, and number of tiles, as well as change tile parameters such as the pattern, the spacing between them and the color.

What’s more, the AndreaMosaic app enables you to create beautiful mosaics with sizes up to one hundred gigapixels and with a maximum number of tiles/images of five hundred thousand.

Taking all things into consideration, if you like creating mosaics, then AndreaMosaic, despite its awkward interface, is a trustworthy and efficient tool for the job.