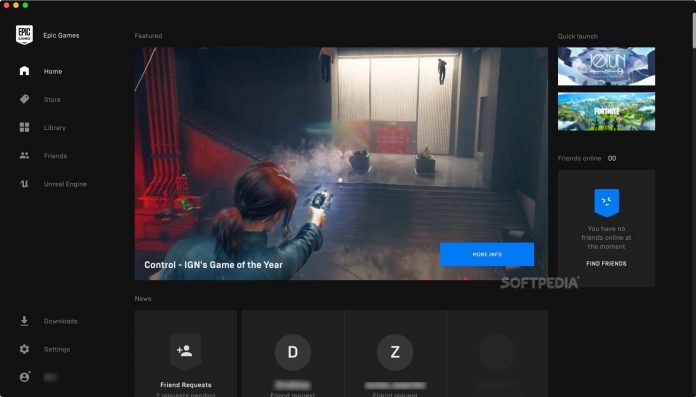 Launcher and Browser for All Titles in The Epic Games Store, the New Distribution Platform Spawned by The Massive Success of Fortnite

Much has been said about the Epic Games Store over the past year, and most of it not good. From the company’s anti-competitive practices and privacy concerns to the current state of the store and the spartan feature set the launcher comes equipped with, there is certainly a lot to talk about. Perhaps the latter two shouldn’t be too surprising considering the company’s rapid rise to the top following Fortnite’s surprisingly huge success.

Of course, we can’t talk about the Epic Games Launcher without covering the store, since they are co-dependent. They both have their strengths and flaws, but in this review, I’ll try to focus more on the launcher’s features and how it compares to the desktop apps offered by other major distribution platforms.

Why some people dislike the Epic Games Store on principle

But not before addressing some of the community’s concerns about the platform. You may not agree that Epic’s financial strategy is anti-competitive, but restricting games to a certain platform, even those that were crowd-funded and promised to users on other marketplaces, is objectively not consumer-friendly.

Epic has also faced criticism for its EULA and suspected data collection. The original license agreement allowed the company a lot of liberties in managing and selling user-created content, and it was also claimed that the app gathered more information than it should have when importing Steam friends lists.

The first impression is actually quite good. The app looks modern, with the same UI design as the web version of the store. It provides access to this marketplace directly, allowing you to browse for titles and purchase them without opening a web browser.

The sidebar provides quick access to your library, friends list and the Unreal Engine, and the overall interface layout is very intuitive.

However, the Home screen isn’t particularly well though-out. While it includes a quick game launcher and shows your online friends, these functions are relegated to the right side of the UI, with most of the space being taken up by the featured game and latest news. This wouldn’t be an issue if you could customize the Home screen or select a different start page, but you can’t.

When it comes to organizing and tracking games, things could be better. Filtering and sorting options are extremely limited, you can’t categorize titles or hide them from your library, and you can’t add non-Epic games.

The launcher tracks your playtime, but achievements are not supported, and this is a very big drawback considering all of its main competitors offer this feature.

Even grabbing screenshots isn’t possible. It feels like a lot of the app’s features are still being developed, but it’s been long enough since the launcher’s release that we really should be seeing more progress.

Unfortunately, things don’t get better for Epic here. As far as interacting with your friends or the community goes, your options are incredibly limited. The text chat is basic at best, and voice chat isn’t supported. You can at least add friends from Steam of Facebook, provided they have linked their accounts as well.

While an offline mode has been added since launch, there is no option to remain online but appear invisible to your friends, a feature that even Blizzard added to their launcher recently, following numerous requests from users.

A launcher you have to use, not one you would want to

That’s what it boils down to. The current state of the launcher and the Epic Store is probably the main reason many people are unhappy with the company’s exclusivity deals. Other distribution platforms offer better stores and desktop apps, but we don’t have the option to use them for certain games. Epic may be a better choice for developers, owing to them taking a smaller share of the profits, but it’s certainly not a better choice for users.

To be fair, the Epic Game Launcher has evolved a lot over the past year, but not as quickly as it should have given the company’s vast financial resources. It’s certainly not terrible, but it should be a lot better if it aims to dethrone Steam, Origin, or even GOG.