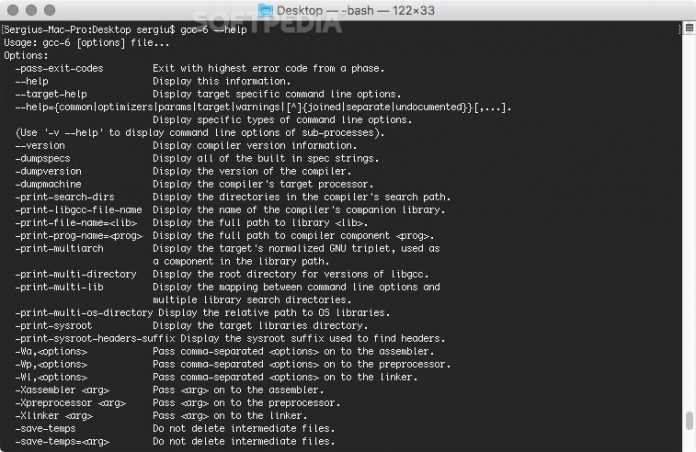 The GNU Compiler Collection or GCC for short comprises front ends for C, Objective-C, C++, Java, Fortran, Go and Ada, along with libraries for the mentioned languages.

GCC us the main component of the GNU toolchain, it is distributed under the GNU General Public License and plays a central role in the continuous growth of free software.

Take advantage of the support for numerous programming languages

Initially, GCC handled only the C programming language, but with the development of additional front ends, GCC expanded to compile C++, Objective-C, Objective-C++, Go, Fortran, Ada, Java, and others.

GCC also offers support for a wide variety of processor architectures and, as a result, it is frequently used as a development tool for both free and proprietary apps. GCC is also available for most embedded platforms, including AMCC, Symbian and Freescale Power Architecture-based chips.

The GNU Compiler Collection also targets various platforms, such as video game consoles like Dreamcast and PlayStation. Moreover, GCC is the standard compile for numerous Unix-like operating systems, including Linux and the BSD family, FreeBSD and LLVM system.

Thanks to GCC’s link-time optimization feature it optimizes across object file boundaries in order to improve the linked binary. Link-time is based on intermediate files containing the serialization of various Gimple representations present in the object file.

Moreover, the use of plugins enables you to extend the GCC compiler and modify stock compilers to fit specific needs by loading external codes as plugins. As follows, you can use plugins to add, remove and replace middle-end passes operating on Gimple representations.

Detailed installation instructions along with the provided documentation are available on GCC’s Installation webpage.

In conclusion, GCC is a comprehensive collection of libraries and front ends that enable you to compile source code into a binary application.