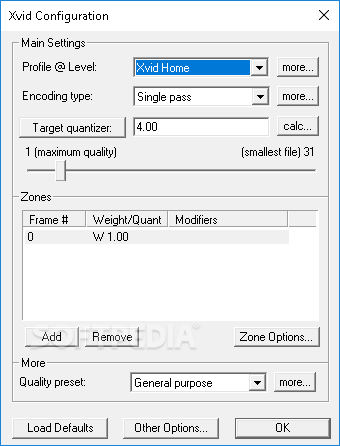 Play Xvid video type files on your computer by installing this codec that lets you handle DIVX, 3IVX and other MPEG-4 items, as well

XviD Video Codec is a product of the XviD project, which is sustained through a collaborative development effort. Its focus is related to compressing videos in order to reduce the required bandwidth in transmissions over networks.

XviD is an open-source MPEG-4 video codec that has its roots in the project that was the basis for DivX 4/5. Although it does not bundle a media player, the codec facilitates the playback of XviD videos in other media applications such as Winamp or Windows Media Player.

Despite general belief, XviD is not a video format; it is a codec that helps to compress and decompress MPEG-4 streams. The advantage is the low bandwidth that will be required to transfer such files, as well as more efficient storage options on discs and removable media.

Even though it aims to fulfill the same purpose as any other similar codec pack, XviD Media Codec does not support comparison with such projects, for many reasons, some of which are controversial, yet justified.

First of all, XviD Media Codec is not provided in a binary package, as you’re probably accustomed to. The official page of its development team provides downloads for the source code only, supposedly because of concerns over patents.

However, it does offer links to websites that host compiled installers of XviD Media Codec. If you’re a developer, you can just compile the source and obtain an installer for the codec; on the other hand, regular users will have a hard time achieving that and instead, they can rely on the suggestions available on the developer’s website.

On an ending note, XviD Media Codec is a project that has over ten years of existence, sustained by extensive efforts from the community. The lack of official binary packages can be compensated by the suggested alternatives, which are trustworthy if advertised by the development team itself.

Load ASA Official Rules of Softball for PC on your Windows XP/7/8/10 and MAC...