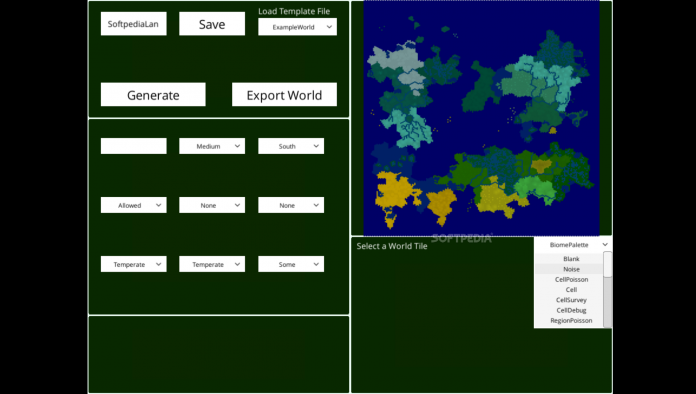 Create worlds and different-looking maps for these, creating assets that can be integrated with any other projects you might be developing

If you’ve seen your fair share of world generators, don’t overlook HexWorld Editor. It might sound weird, but it really is an interesting program to create worlds and even solid bases for future projects. With the help of this tool, you can create iterations of what may look like new worlds, formed out of various continents equally divided among the blank background you’re looking at. Click Generate and start creating a story for your invented world.

What’s the catch with this application

HexWorld Editor is not your average functionality-filled app. Quite the opposite. It’s an application very few will find useful. This is not to say that the app lacks usefulness, but rather that it’s aimed at a pretty small group of individuals. You could use this app to create a map, illustrations or some sort of map project, a worthy background for your video game or simply play with it as you would with a normal app. Whatever your reason or interest in this particular app, simply give it a try and have fun creating far-away lands.

How to operate this program?

Running the program is just as easy as using it. Once it’s up and running, you’ll be met with a menu that will allow you to make various selections. Certain functions are not labeled so you’ll have to mostly guess what each drop-down menu deals with. Name your creation and load up any template file you might have. Deal with the particularities of the map such as the display mode of the resulting app, the distribution of landmasses on the new map and the orientation of each of the components. Additionally, depending on the kind of map you are dealing with you’ll have to also set the distribution of your world in regards to climatic changes.

HexWorld Editor is an application that will mostly appeal to those aiming to create unique elements, either for personal use or for integration with other projects. It’s one of those programs that stimulate your creativity, without really offering you much more. Even so, it’s fun to play around with this application. Lastly, if you want to give the program a little more purpose, you can export your creation as a few JSON files and further develop what you’ve created with the help of other specialized software.