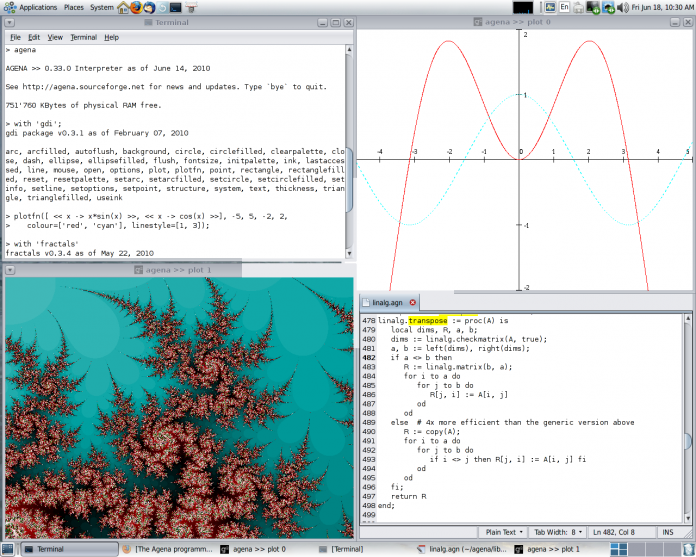 Agena is a programming language that uses a type of syntax that is comparable to Algol 68, while also comprising features from LUA, SQL or Maple. It functions as an imperative language, meaning that it requires the input of every step an application needs to go through in order to reach a state or output a result.

This programming language is aimed mainly at scientific, linguistic and educational uses, but it can even be used for scripting, depending on the intentions and requirements of its users. It offers a satisfying processing speed for real and complex mathematics and graphics operations.

Agena offers support for a variety of basic functions which are specific to this type pf programming languages, such as assignments, conditions (‘If’, ‘Then’, ‘Elif’, ‘OnSuccess’, ‘Else’), loops (‘For’, ‘In’, ‘While’, ‘Do / As’, ‘Do / Until’), procedures and many others.

This language can work with several data types, ranging from complex and rational numbers to booleans, null value, vectors, threads, the most basic of which are integrated into its kernel for performance reasons. At the same time, Agena supports procedures with full lexical scope.

Following an uneventful installation process, users can launch Agena either from the start menu or by entering ‘agena’ in a shell. At the same time, AgenaEdit is also installed, that users can work within parallel. Users can start entering commands into the Console as well as being writing the code they wish to create in AgenaEdit.

By resorting to the extensive documentation, users can get a handle on this imperative language through the step by step indications, the statement and assignment examples provided, so they can gradually become proficient in its use.

To conclude, Agena is a procedural programming language that can be used for a variety of purposes, ranging from scriptwriting to educational or scientific applications.